"Simply outstanding.  The Odyssey absolutely figures on my list of the world's top 10 dive liveaboards.  Incredible crew.  Classic style.  Space & comfort.  All the tech back-up you need.  For me, there's just no finer way to explore the wonders of Chuuk Lagoon."  ...   Dominick Macan

ON BOARD TRUK ODYSSEY

STYLE & QUALITY WITH A TECH-SAVVY CREW

Truk Odyssey offers serious wreck divers everything they want & require ... and possibly even more.  Since her refit in 2018, she's looking a bit smarter but all her substantial quality-diving advantages remain the same. Starting at the top of the ship, the upper deck features a good-sized, partially covered sun deck with lounge chairs and deck chairs.  Just inside is the galley and large restaurant and well-stocked bar with a long line of picture windows on both sides. This is undoubted the most striking room on the Odyssey, with its attractive Fijian teak tables and the beautiful full-service wet bar which is made of coconut wood. (After coconut trees fall, the wood is collected, treated and used to make gorgeous furniture.)  Four of the cabins are also on this deck.

Downstairs on the main deck is the super-sized lounge with full entertainment system and hundreds of movies and loads of music to choose from, plus plenty of games.  To the aft of the lounge is the spacious dive deck with everything you need for scuba, rebreather and technical diving.  Five additional cabins are located on the lower deck.

Meals are generally served buffet style and they get great reviews. Snacks are always available after dives. 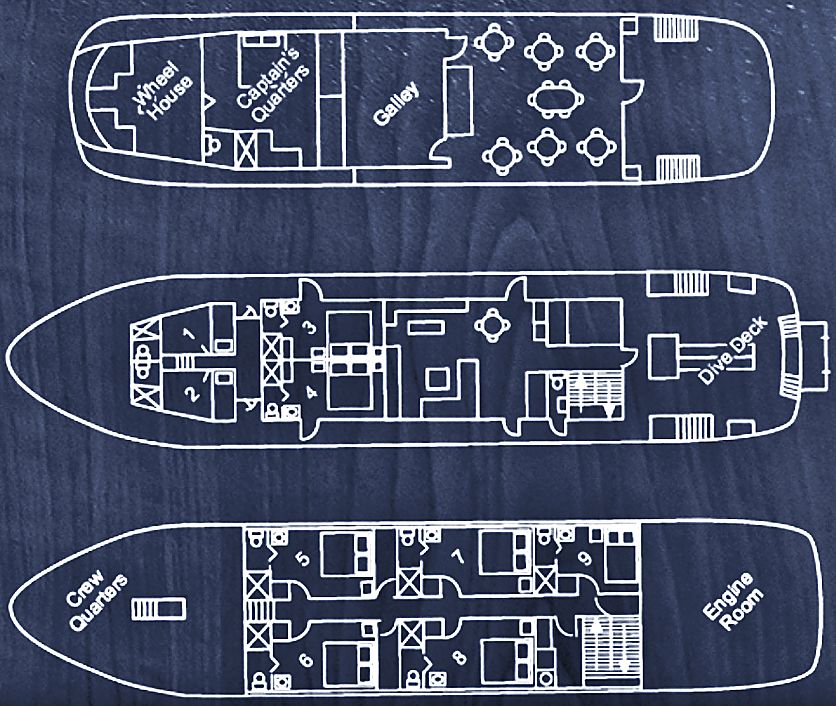 Since most of the dive sites in Truk Lagoon are fairly close to each other, it is easy for Odyssey to move around. One of the parts about diving aboard Odyssey is that they don't require everyone to dive at the same time, so you and your dive buddy might be the only divers on a 500' wreck.  For photographers, this offers more opportunities to shoot those popular scenes without having to wait for others to move out of the way.

See a truk lagoon map and a few of the diving highlights  ..... open

Many of the wrecks are “Maru” or merchant vessels that had been left at anchor when the American attacks came.  A few had been fortified with anti-aircraft weapons and many carried important army supplies including Zero Fighter aircraft parts, tanks, torpedo shells, trucks and road supplies.  Bottles, cooking utensils, items from everyday life and personal artifacts can be found in several of the wrecks.

Emily Flying Boat – This huge fighting plane was armed with machine guns, canons and bombs. After being hit by the Americans, the plane managed to fly to Truk, although several important Japanese officers on board had been killed. The pilot crash landed and a few of the crew survived. The impressive wreck is amongst the most popular in Truk for photographers.

Nippo Maru – This is a wreck which nearly every wreck diver dreams of visiting. Another favorite for photographers, the helm & telegraphs make startling subjects. You’ll also find a load of weapons & artillery, mines, gas-masks, shoes and more in the holds … trucks & a tank … Howitzers & an anti-aircraft gun on the deck

Amagisan Maru – Another ship originally used for both passengers & cargo, the Amagisan Maru offers a big photographic gun on her bow & one at the stern, plus aircraft parts, trucks and a car the hold. There’s also a tanker truck just at her side.

San Francisco Maru – Pre-requiaition by the Japanese Navy, the San Francisco Maru carried passengers and cargo of minerals & coal. The haunting gun on the bow of the ship is one of Truk’s most photographed. The San Francisco also features several trucks & armored tanks, the usual artillery, torpedoes and bombs … along with airplane parts 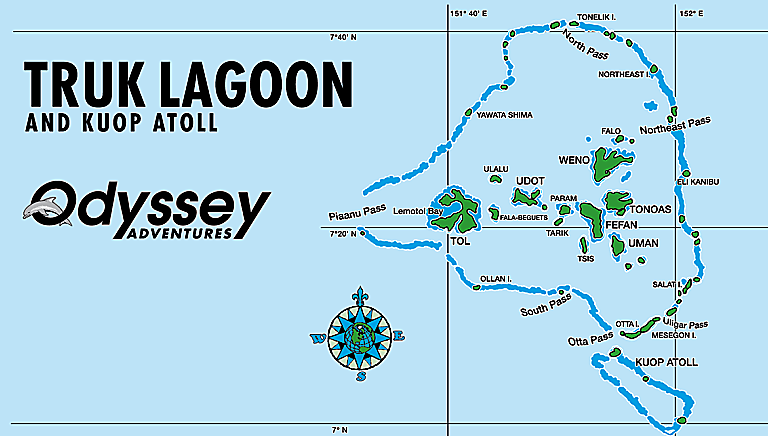 Your international flights should be booked to Chuuk International Airport(TKK).  Most flights to Chuuk require transit via Hawaii or Guam.   Guests are greeted at the airport by an Odyssey crew member. Transfers to and from the airport are included in the price at the beginning and end of the scheduled charter for those arriving and departing on charter schedule.

Boarding time on Saturday begins at 5 PM and continues through the night for later arriving flights. If you have enjoyed a night or more at a hotel you will be contacted by someone from the staff  to confirm transfer arrangements and timings. At the end of their trip you will be transferred back to the hotel or to the airport as appropriate.

Truk Odyssey is not on the Live Search for Spaces