TRUK OR BIKINI QUESTIONS  ?  WE'RE READY WITH ANSWERS ...  CONTACT US

The wreck diving in Truk Lagoon & at Bikini Atoll is nothing less than stirring..   It took only 2 days, in 1944, for the U.S. to launch more than 500 strikes against the Japanese fleet harbored in Truk Lagoon and to virtually demolish it.  Between 1946 and 1958, 23 nuclear devices were detonated by the United States at Bikini Atoll, sinking a variety of vessels brought there for testing purposes ... and today we can safely dive on all of the wrecks which are at recreational depths        read more

Truk Lagoon has excellent choices in terms of liveaboards and the Truk Master will now be making an annual trek over to the neighboring Marshall Islands during the period of May through August to visit Bikini Atoll, adding new and stirring wreck dives to her repertoire.  If you're a wreck aficionado I can't recommend this option highly enough!  You can read more about them here.

If you're interested in putting together a combination of 2 or 3 of the destinations (which is what I did on my first trip) just let me know.  I'd be pleased to help with the details.  Check it all out here on our Micronesia page and when you're ready to hear more, I'm an email away and will respond to your request with any additional details that you wish.     Cheers, Dom

The fascinating Truk Lagoon is famous in large part due to its prominent place in WWII history, as the American attacks here on the Japanese forces were a virtual Pearl Harbor in reverse.   The wreck diving here is amongst the most stirring experiences a diver can have and the calm, tropical situation of the lagoon offers easy access to the wrecks.

Many of the wrecks are “Maru”, Japanese merchant vessels that were at anchor in the lagoon when the Americans attacked.  Some had been fortified with anti-aircraft weapons and many carried important army supplies including Zero Fighter aircraft parts, tanks, torpedo shells, trucks and road supplies. Bottles, cooking utensils, items from everyday life and personal artifacts can be found in several of the wrecks, serving as a reminder to the visiting divers of those who lost their lives during the battle.

For your diving support you have 3 excellent options to choose from: the Truk Odyssey liveaboard is still regarded as one of the best there is anywhere in the world & has just undergone some major work; the always popular Thorfinn is a long-popular option in the Lagoon;  and the sturdy Truk Master (which also takes divers to Bikini Atoll mid-year every year) joined this group in 2016.

GO FOR A COMBO TRIP WITH PALAU OR YAP

You can certainly dive Truk (Chuuk) Lagoon as a single destination but we recommend, if possible, doing it in conjunction with either land-based or liveaboard diving in stunning Palau.  Once you've travelled all that distance, it's a shame to miss half the fun ! And .... if you have time, you can add in an unforgettable trip to Yap to dive with the magnificent manta rays who hang out there.

If you choose a combo trip, you may be lucky enough to get from Palau to Truk (Chuuk) to board your 2nd liveaboard on a boat the same day you leave Palau  .... for an unforgettable wreck diving experience.   Other times, you'll have a day or two between liveaboard trips ... with great places to stay and dive.

This remote wreck diving destination, in spite of its lamentable history, is an extraordinary addition to the diving world.  While not locatred in Micronesia, it's close enough for the Truk Master to include in special itineraries.

Bikini Atoll is part of the Republic of the Marshall Islands, which covers nearly 1 million square miles of idyllic emerald-green coral atolls, surrounded by the crystal-blue waters of the Pacific.  It was declared the first UNESCO World Heritage site in 2010.

SCUBA DIVING UNLIKE ANYWHERE ELSE

This is a one of a kind diving experience, as it features not only beautiful reefs, corals and wonderful marine life, but above all, it is the final resting place for some of the most significant warships in history.  It is often ranked first on a serious wreck diver's list. You will be able to dive a unique collection of historic battleships, cruisers, as well as the world famous USS Saratoga aircraft carrier with its 270m (888ft.) flight deck.   The Saratoga was sunk by an atomic bomb detonation just 400 yards from the ship. She now rests in the sand at 165 feet, along with three airplanes that were blown off the deck.

You can expect to explore up to 10 ships and submarines on your expedition. As mentioned, the huge carrier, USS Saratoga is often the top venue, but you can also dive the USS Lamson and USS Anderson, American destroyers which are largely intact and the USS Apogon, a submarine which hosts corals & sponges, fish & critters … and attracts resident sharks. The Japanese battleship, Nagato, is also very popular. Lying upside down, it’s also still mostly intact, allowing divers to swim through parts of the vessel to explore its inner structure.

Most wrecks in Bikini Atoll are located beyond recreational diving maximum depths; therefore technical diving skills and wreck experience are required.  Regular trips on the Truk Master started in May 2018 with a choice of 10 and 11 night trips and a maximum of 11 guests per cruise.  Technical diving is, of course, supported.

Due to the success of this program, Master Liveaboards is adding a second vessel to the Bikini itinerary as of 2022.

In fact, they are switching the boats for logistical reasons (the current Solomons boat is larger & can carry more divers to popular Truk & Bikini).

Available spaces are listed under Bikini Atoll on our Live Search.

AVID WRECK DIVERS :  ARE TRUK & BIKINI ON YOUR BUCKET LIST ? 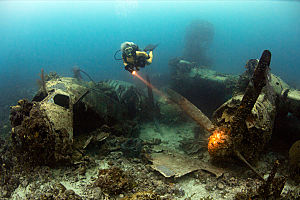 Truk ...  chilling remains of WWII
The waters of Truk hold the remains of the Japanese fleet hit by Operation Hailstone in February 1944.   The beauty that Nature has placed on these wartime gravesites is unforgettable.  The sadness & horror of war cannot be wiped away, but it has been softened by time and the historical significance of these sites is worth the effort of the trip.  There are so many wrecks to dive that we'll only mention a few.   Let's start with the San Francisco Maru freighter, which is a very deep dive, but if you brave it, you'll find the remains of Toyota and Isuzu trucks, three Japanese light tanks, a high velocity anti-aircraft gun and a staff car. ... read more

The Sankisan Maru freighter is a much easier dive for most divers, located at only 24 meters.   She's sitting fully upright on a slope, covered with beautiful corals, oysters, sea squirts, tube sponges and lots of dazzling damselfish.

At only 15 meters below the surface, one of the most popular wreck dives is on the Fujikawa Maru.   With much of her bow end surprisingly intact, she's an impressive wreck covered with sea fans and soft corals, and provides a home to a number of large Napoleon Wrasse, as well as being a cleaning station.    For all of you intrepid adventurers, you can swim into the hull, and down a couple of decks where you'll find four Japanese fighter planes.

In addition, Truk offers some great reef diving, particularly on the outer walls of the lagoon, with drop-offs and passes and tons of fish life in crystal clear waters. 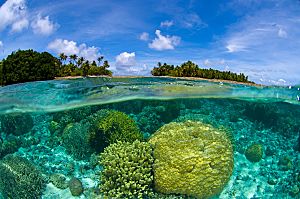 Bikini Atoll, Marshall Islands ...  the aftermath of testing The Bomb
More than 60 years on from the destructive bombing of this atoll ... and the displacement of its population .... the shipwrecks remain unequivacobly impressive, the horror having been softened a bit over time by the many kinds of corals and species of fish which have taken up residence. The signature dive of Bikini Lagoon: the USS Saratoga CV-3. This 270 metres (888 feet) long and 29 metres (95 feet) wide American aircraft carrier which rests  at a depth of 52 meters.  read more ...

Her bridge is easily accessible at 18 metres depth, her flight deck at 28 metres, and the hanger for the Helldivers at 32 metres. These Helldivers and bombs are still on display complete with all dials and controls.

In addition to the Saratoga, you'll find a battleship, a couple of destroyers, two submarines, a dreadnought, an attack support boat (all American vessels) plus a Japanese Agano-class light cruiser and a German heavy cruiser.   And, you'll be surprised by the life in these waters .... plenty of sharks, beautiful coral life and plenty of fish.  If you're a tech and wreck diver this is a destination to add to your wish list!

The Federated States of Micronesia includes the diving havens of Palau, Truk & Yap, covering roughly 3 million square miles.   East of the Philippines & north of Indonesia, the islands are small, rocky & largely uninhabitable, but richly forested, many with dazzling white sand beaches.  Truk Lagoon (Chuuk State) consists of 11 main islands, plus 87 smaller ones within the lagoon & on the fringing coral reef.   The lagoon is very protected, which is what made it an ideal setting for the Japanese navy base in WWII.