A note from Dom ... Audacious Australia

A rollicking 6 months of my earlier life was spent in Australia, hitching from pillar to post, enjoying the people, the climate, the incredible diving.  I returned a few years ago for 6 weeks - and everything was as wonderful as I remembered.  You'll never find a warmer welcome anywhere than you'll find in Australia !  This affable land also affords a fabulous variety of diving from luscious corals to ocean giants ....     read more ...

You've got the warm and colorful waters of the Great Barrier Reef and the energizing cold waters off the south coast of Australia.  There in the south, you may be lucky enough to dive with the acclaimed shark expert Rodney Fox, who arranges 3-5 night Great White Shark trips aboard his 23 meter vessel Princess II.

The easiest access to good diving is in the North of Queensland around Cairns and Cooktown and the best boats there dive roughly the same area and reefs with 3 night, 4 night, 6 and 7 night itineraries - and they take you to the hopping spots with great reef life and plenty of sharks - the Ribbon Reefs, Cod Hole and Osprey Reef in the Coral Sea.

While there are lots of operators & boats, I stick with my two favorites, knowing their dependability and expertise for these challenging trips.  I've worked with these guys for years and know that they never disappoint so we'll help you to choose between the sturdy & comfortable Mike Ball's Spoilsport and the graceful & lovely Spirit of Freedom.

Please note that in the October/ November period there are some far northern trips up to the Raine Island area that I think are about as spectacular as diving trips get.   Keep an eye on our Special Expeditions page for dates, rates and available spaces!

When you're ready to know more, please don't hesitate to contact me for further information.   Cheers, Dom

DIVE THE UNTOUCHED ZONES OF THE GREAT BARRIER REEF

Australian diving offers everything from the tame to the treacherous.  This myriad of scuba diving experiences also ranges from day-boat diving, where you get crowds of divers and a plethora of boats in limited spaces .... to the stunning remote stretches of outer reef and islands, accessible only by liveaboard, where you find peace, tranquility, healthy corals, "zillions" of fish and an unbelievable number of shark species.

Our recommendation for diving Australia will always be a liveaboard trip, which will take you to find, in addition to vibrant reefs with a variety of coral fish and intriguing creatures, plenty of sharks and everybody's favorite Australian marine creature, the massive Potato Cod.

Further afield, you can find exotic scuba diving in the Coral Sea which is dotted underwater with extinct volcanoes, vast walls, glorious corals and lively pelagic action. And, everywhere you look you find turtles - several different species of them - plus dolphins, whales and sharks.   Sharks, sharks, sharks are around every corner.

Do you know that southern Australia offers the adrenaline rush of diving with the Great Whites?    And what about diving the incredible giant kelp forests off the shores of Tasmania where you find not only humongous kelp but also those intriguing leafy sea dragons?  Are you aware that Australia offers some fine wreck diving and some wonderful cave dives?  Have you ever seen a thresher shark?  a zebra shark?  a bronze whaler?  a pygmy shark?  a sawfish shark?

All of those and so many more are possible sightings in Australian waters.  Our favorite liveaboards offer special trips to dive with Australia's unique species ....

DIVE LIVEABOARDS WILL WHISK YOU AWAY FROM THE CROWDS

You can dive from one of many land-based options or day boats ... but serious scuba divers who wish to experience the most remote areas and to access the best of the diving in Australia, will want to be on a dive liveaboard.  We have chosen the liveaboard vessels we have full confidence in.  They run reliable, safety-conscious, professional diving adventures which we recommend without hesitation. 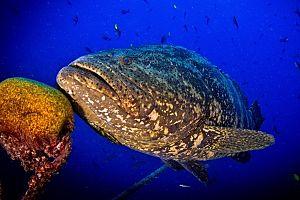 RIBBON REEFS & COD HOLE
One of the finest dive areas is known as The Ribbon Reefs - long, thin strips of reef at the far edge of the Great Barrier Reef (roughly 50 km - 100 km from the northern shores of Queensland).  Here you find generally excellent visibility & calm seas, superb reef life – both large & small - and some wonderful critters. You may know the names Cod Hole, Steve's Bommie and The Temple of Doom as these Ribbon Reef dive sites are world-famous amongst divers.   Cod Hole, as you might guess, is known for its massive Giant potato cod, which often attain a weight of as much as 60 kg.  These gentle monsters will take food right out of your hand. You'll also find plenty of coral trout, sweetlips, triggerfish and trevally at this site.

Steve's Bommie is known for its swarming schools of big fish and macro life. Barracudas, white tip reef sharks are standard fare and sometimes you're lucky enough to spot minke whales here.    The Temple of Doom is bommie famous for its reef like and equally for its pelagic action. You won't know where to look! 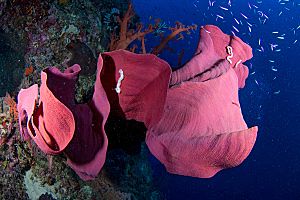 CORAL SEA TRIPS
You can choose to dive further out from the Ribbon Reefs in the Coral Sea itself. The most popular destination her is Osprey Reef, the most northerly of the reefs in the Coral Sea. The reef, basically an oval, consists of a relatively shallow lagoon area, and shelves outside the reef which plunge 1,000 meters deep.  This creates an ideal situation for pelagic action and as to the reef itself, the corals are healthy and enormous – and the walls simply astounding.

The reef is separated from the continental shelf by a deep water trough and is regarded as one of the premier Australian liveaboard destinations. Known for great visibility, Osprey Reef offers lots of big fish action.

You'll encounter turtles, rays and a large variety of whales & sharks (including hammerheads & even the occasional whale shark), dolphins, sailfish and marlin – plus the ever present tuna and barracuda. 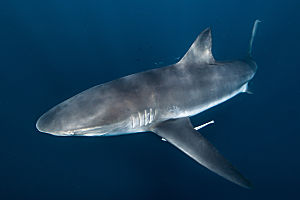 FAR NORTH GREAT BARRIER REEF
An expedition to the far north traverses the coastline from Cairns to Ashmore Reef. One of the last totally pristine areas of the Great Barrier Reef, this area is seldom visited & many of the reefs in the region are yet to be explored.  Australia's spring & early summer is the best time to dive the outer walls of the Far Northern Reefs.  This time of year presents likely encounters with tiger sharks, manta rays and whale sharks and even the occasional marlin.

Divers can also expect a lot of shark action with silvertip, grey reef and white tip reef sharks commonly coming in close. The region abounds with masses of pelagic and reef fish and an incredible variety of colorful corals and invertebrates.

Check our Unique Adventures section for yearly scheduled trips to the Far North. 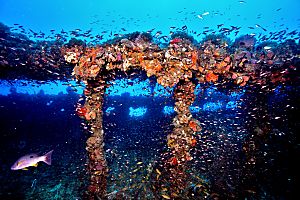 WRECK OF THE YONGALA
Considered one of the world's top wreck dives & protected as a national heritage site, no penetration diving is allowed on the wreck of this formerly glorious passenger liner.  Overcome in a cyclone in 1911 all lives aboard were lost & the ship remained undiscovered until 1958.  Today she is covered with beautiful corals, sea fans, whips and sponges ... and surrounded by fantastic marine life.The eeriness of the wreck is mitigated by the vibrant life which she provides a home for: tuna, trevally, spotted eagle rays & occasionally mantas, giant groupers, cods, huge black rays, cobia,

Maori & Napoleon wrasse, barramundi, purfferfish, sweetlips, coral trout, turtles and loads of sea snakes. From June to November, you might be lucky enough to spot minke or humpback and whale sharks often pass by between October and January.

The water and currents can be rough around the wreck and dives can be subject to cancellation so do plan to spend enough time here to have more than one shot at this memorable experience. 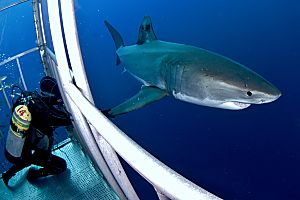 RODNEY FOX SHARK EXPEDITIONS
Rodney Fox has a fascinating history with sharks which began with being savagely attacked by a Great White while participating in a fishing competition.  The experience was life transforming and Rodney today is one of the world's premier supporters of sharks, in particular the magnificent Great Whites.  He lectures, he advocates, he educates, he conducts research and in partnership with his son, Andrew, he gives divers & non-divers alike the opportunity to spend time in the shark's world ... in the safest possible manner.

You can choose from 2, 3 or 4 night itineraries on the Princess II or arrange a custom itinerary of 5 to 8 nights (generally an option for groups).  Diving on 2 night trips is surface cage diving only but all other trips include, for certified scuba divers, an opportunity to experience the only ocean-floor cage in the world.

The diving is done in the Neptune Islands, the remote, rugged & rocky islands which are home to Australia's largest colony of Fur Seals and known for their White-Breasted Sea Eagles, Ospreys, Rock Parrots, the fabled Albatross.

Rodney Fox Shark Expeditions is the only operator with permission to dive at these islands which only adds to the immense sense of adventure.

Surface Cage: The cage holds up to 4 people at one time and anyone above the age of 8 is welcome to enjoy the proximity of the ocean creatures which approach with curiosity or merely swim past, oblivious to the land creatures who are briefly in their world.

Ocean Floor Cage: We can't possibly describe the ocean floor cage experience better than it's explained by Rodney and his son, Andrew. "Up to three guests and a Dive Professional descend approximately 20 metres (66ft) into world that will captivate and spell-bind – a blue aquarium of rocky outcrops teeming with reef fish, white sand and swaying sea-grasses, laconic Giant Blue Groupers, elegant stingrays and a watchful assortment of sharks. And, of course, the Great White that appears out of the blue and sweeps gracefully towards, over and around the cage. It is amazing!"

After diving here, it's easy to add on a trip to the kelp forests off Tasmania where you can dive with (and photograph) the world's MOST exotic creatures, the leafy seadragon!  Ask us about this unforgettable add-on!