I call it a "must do" destination for many reasons.   First, one of my all-time favorite liveaboards, the Bilikiki, is still hard at work here, keeping her reputation constantly intact.   Secondly, the marine environment is pristine & untouched - and the volume & variety of life is mind-boggling.  The diving will fill you with wonder, the wartime wrecks will touch your soul and you won't want to return home without at least one piece of stuning Solomons wood carving.  ...  read more

The wreck diving, done amongst scores & scores of ships & planes lost in the catastrophic battles at Guadalcanal and other sites here in this idyllic Pacific Island nation, in my opinion, is second to none.

Regarding the infrastructure, which is limited, I mentioned the Bilikiki.  No one could make it easier to do 5 dives per day and still have the time & opportunity for cultural exploration, visiting remote & authentically rustic fishing villages where you can interact with the villagers, observe tribal customs and find the finest wood carvings in the South Pacific.

However, the large & sturdy Taka has joined the Bilikiki doing cruises here, opening up more schedule options and we've had lots of excellent feedback about her ... and she's a less expensive option ... so I can happily recommend both.

In addition, one of my very favorite dive resorts is located here, Uepi Island Resort.  Relaxed, comfortable & unpretentious, this resort is set on a drop-dead gorgeous island which is nothing but jungle, white sand and Uepi Resort ... surrounded, of course, by some of the world's finest scuba diving !

Together, Bilikiki, Taka and Uepi make up some fine reasons for adding the Solomons to your short-list of dive destination targets.

And, hard as it may be to believe, the inhabitants of these islands remain relatively untouched by modern life, exposing the visitor a truly unique vision of another world and another time.  In my opinion, the Solomon Islands are as exotic as it gets - and I hope you'll find yourself tempted to explore them.

Check it all out here on our Solomons page and when you're ready to hear more, I'm a phone call or an email away and will respond to your request with any additional details that you wish.    Cheers, Dom

The Solomon Islands are an exception to the rule and one of the few nations which has truly maintained its paradise ambiance and has managed to fend off, to a large degree, the incursions of modern civilization.

Amongst the impressive masses of superb corals, you will encounter the cast of characters one would expect: the pipefish, blennies, cuttlefish, octopus, shrimps, nudibranchs, porcelain crabs, hairy squat lobsters, ribbon eels and legions of others.

But there is open water diving here, too, with heart-pounding exposure to jacks & barracudas, sharks, mantas & dolphins, whales and even Orcas, if you're lucky!

The Solomon Islands will surely be known well into the future for Guadalcanal and its strategic importance in the fierce push during World War II against the Japanese.  The war turned here in favor of the allied forces.

Strangely, the Solomon Islands would have offered divers magnificent opportunities had this war never been fought, but the offensive that was launched at Guadalcanal in August of 1942 sealed the fate of the Solomons for the diving world.   The incalculable loss of sea craft & aircraft in and around this chain of islands added hauntingly beautiful wrecks to the already lush underwater habitat of the region.

There are hundreds of airplane wrecks & nearly 50 different warships, half from the allied forces, half from the Japanese forces.  While most settled into their watery graves at a depth that prohibits the average diver from exploring them, some are more easily accessible and will be a highlight of your diving experience in the Solomons - both from a historical perspective and from a perspective of sheer beauty.

SOLOMONS DIVING ADVENTURES ... YES, YOU CAN HAVE IT ALL ! 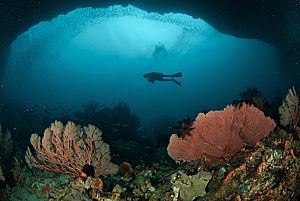 Russell Islands ... from a startling, light-filled canyon to a wartime dump
Cruising westward from Honiara takes you to the Russell Islands & the Leru Cut, a canyon nearly 100 meters deep which opens up in the jungle & provides spectacular photo ops.   Leru has a floor of fine white sand which reflects incoming light, giving a cathedral-like effect.  Outside of the cut is a fabulous wall teeming with fish life. Also well-known in this island group is Mirror Pond: a myriad of swim-throughs, caverns & caves created by volcanic action. The main swim-through, covered with sponges & feather-stars, leads divers to a shallow mangrove-ringed pool in the jungle. Nearby you can visit the popular bat cave for a little terra firma excitement  ...  read more

Back underwater, you'll be off to dive sites with countless healthy staghorn corals which spread a vision of green and yellow nearly as far as the eye can see and you can explore walls covered with exquisite fans which hide very shy pygmy seahorses.  In addition, you'll have more walls & caves & caverns to entice you ... along with black & white tip sharks, rays & lobsters.

Finally, White Beach, home to a major American supply base during WWII, is known for the artificial reef created by dumping trucks, jeeps, tractors, barges, bulldozers and large amounts of ammunition into the water.   Covered now with corals and loads of fish, this gruesome reminder of warfare has been softened by time. Saltwater crocodiles have been sighted here several times. Many of the interesting wrecks are at 120-140 feet .... 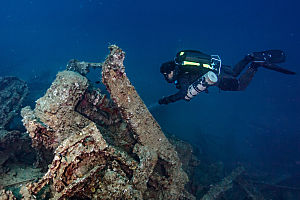 Florida Islands  ...  everything from batfish to mantas to warships
Tulagi, the main port, was a significant Japanese WWII base.  It provides some fine wreck dives plus stunning walls & great critters.  The battles at Tulagi played a large part in the turning point of WWII in the South Pacific.  Divers can access both Japanese & American seaplanes, cargo ships, mine-sweepers & heavy cruisers.  Beyond the war artifacts, the Florida Islands have much to offer including some great walls and the exploration of Mbike & Sandfly Passage, which are likely to bring sightings of manta rays and huge schools of fusiliers and anthias.  Just offshore near Tulagi, you'll dive the popular Twin Tunnels .... two vertical lava tubes embedded in a sea mount ... read more ...

Swim through either one and you'll find they meet one another and a luscious wall.   As you fly through your tunnel, like Alice in Wonderland, you'll pass fans & whip corals, so try to slow down & smell the roses, so to speak.  After your tube ride, you'll swim through countless fusiliers and ascend to the reef where you'll search for pygmy seahorses, hairy squat lobsters, cuttlefish, octopus, eels.

Maravagi, in the Florida Islands, is beloved for the “Devil’s Highway” where  you'll hook onto the reef (in a very swift current) while above you the manta rays play! Also, in the shallows, divers find colorful fish and a critter haven (lots of juveniles) with cuttlefish, crabs, scorpionfish, batfish, ornate and robust ghost pipefish, waspfish and the ever-present hawkfish. 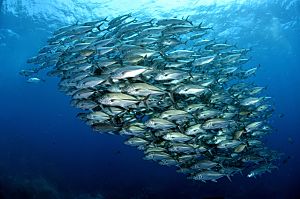 Mary Island ...  extinct volcano west of the Russel Islands
The best opportunity in the Solomons for the big stuff .... surrounded by deep walls and masses of pelagic fish, passing sharks, mantas ... and big gorgonians.   If you're lucky, you'll hear Kavachi, the underwater volcano, as it grumbles & rumbles ... adding a great deal of drama to an otherwise already exciting set of dives!  Off the edge of the remote Mary Island, known to the Solomon Islanders as Mborokua, divers normally encounter a massive school of giant trevally which boasts thousands of individuals ... and these guys are BIG !  ...  read more

You'll have a current and if you can hook on you'll be able to watch a fine travelling show passing by.  In addition to the trevally, you've got grey reef sharks, dog-tooth tuna, schooling barracuda .... plus surgeonfish, snappers and some whopping bumphead parrotfish.

Of course, you'll have all the soft & hard coral wonders of the Solomons ... plus unicornfish, angel fish & simply millions of anthias. 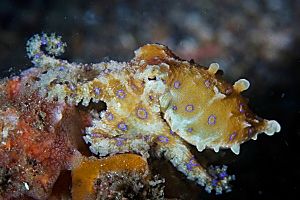 Marovo Lagoon ...  the longest saltwater lagoon in the world & World Heritage Site
Home to Uepi Island and some of the Solomons' finest coral, critter & fish diving, Marovo Lagoon is a double barrier reef enclosed lagoon & is beloved for its exquisite beauty &  diversity.  Get ready for a plethora of gorgonian fans and multi-hued soft corals ... walls which plunge into the abyss ... and a processions of pelagics.  Hold onto your hat as you dive into the onslaught of schooling barracuda, jacks, runners, rays and sharks  ...  read more ...

At times large schools of feeding fish swarm across the reef at the deepest point and into the shallows. The predators, giant trevally, mackerel, wahoo, rainbow runner, big-eye jacks, dogtooth & smaller tuna, sharks and barracuda just cruise around waiting for their next meal.

The coral gardens around the lagoon are graced with anemones, mantis shrimps, coral shrimps and of course a myriad of exotic fish of all sizes ... including butterfly-fish, basselets, angelfish, surgeonfish, fusiliers, wrasses, the resident scorpion ‘firefish’ and clown-trigger fish.   Also you get plenty of healthy-sized turtles, super-sized schools of unicornfish, oceanic triggerfish and grey reef sharks.

A couple of dive sites have resident whaler sharks and around the jetty, you get a bit of nearly everything, including sharks .... but certainly an abundance of smaller fish, clams, decorator crabs, hinge-back shrimp, spindle cowries, basket stars, hawk fish, slipper lobsters and prolific invertebrate life.

The list continues and we can’t do it justice. You’ll just have to see for yourself!

Spectacular in every sense, the Solomon Islands, an archipelago of nearly 1000 islands, is located between Papua New Guinea & Vanuatu & just less than 2000 kilometers north-east of Australia.   Born of volcanic eruptions, this nation, with more tropical jungles & white sand beaches than human inhabitants, exudes a feeling of utopia – above & below the water line.