Red Sea Aggressor II is a 42-meter (138-foot) 22-passenger yacht which takes divers from Hurghada to explore the wonders of the Northern Red Sea, Ras Mohamed & Straits of Tiran.

A word from Dom:  "Typical Aggressor operation ... plenty of space to chill between dives (inside & out), ample good food and simply superb diving."   ...  Dominick Macan

ON BOARD RED SEA AGGRESSOR II

We start the tour on the sky deck where we find sun mats, seating and a Jacuzzi.  Just below, on the upper deck, is a cozy interior lounge with comfy seating which opens onto the aft deck where you find another exterior lounge (mostly covered) and plenty of deck chairs. Two large cabins are also found on this deck.   The main deck houses a large combination salon and dining area while aft-deck you find the ample dive deck with plenty of space for personal belongings and an enormous dive platform.  The remainder of the cabins are located on the lower deck.  There is a variety of nightly entertainment  in the salon whilc a selection of 400 classic and new release movies can be viewed in your cabin, if you prefer.   A small library of books for exchange is maintained onboard as well as marine life identification books for reference.  & .

The menu aboard includes a variety of Egyptian cuisine & international favorites. Dinners are chef prepared and served tableside each evening. The  Aggressor's beverage selection includes fruit juices, soft drinks, iced tea, coffee, and a limited selection of local beer and wine which are all complimentary.

The Red Sea Aggressor II offers a complete digital photo & video facility including a PC for downloading photos.  Photographers will appreciate the charging station and the large camera table with plenty of space for your camera and video equipment. 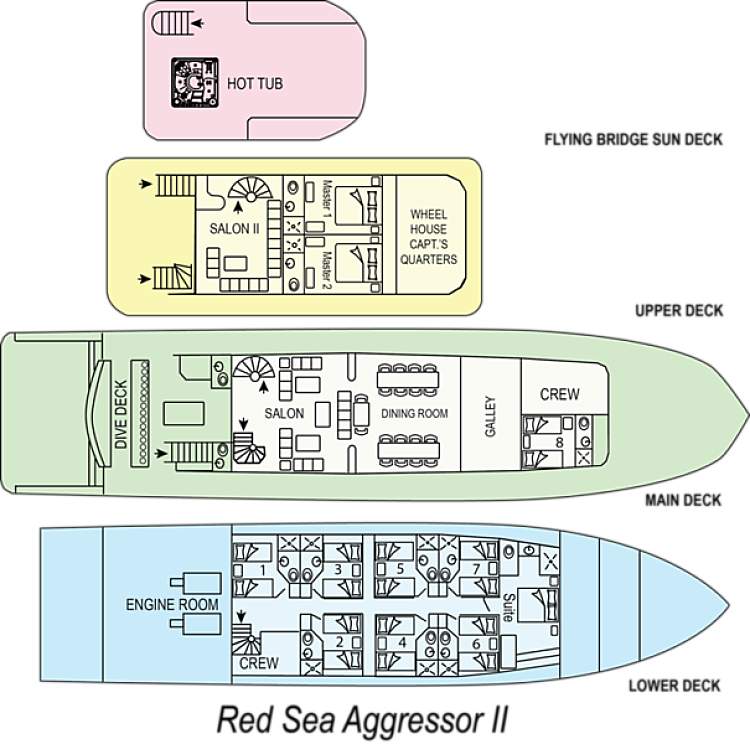 The Red Sea Aggressor II typically offers guests a 7-night itinerary diving the best of the northern Red Sea to Ras Mohamed and the Straits of Tiran.  This part of the Red Sea provides some of the most historic wrecks like the Thistlegorm, Rosalie Moller, and Abu Nuhas.

View the highlights of these trips and an itinerary map....... open
The final itinerary is, of course, always dependant upon weather, sea conditions and where the best animal sightings are at any particular time of year

Northern Red Sea Dive Sites
Along with the renowned wrecks, the northern Red Sea’s Ras Mohamed National Park is full of pristine coral reefs and abundant marine life. The Straits of Tiran, narrow sea passages, are world famous for their extraordinary diversity of corals and pelagics. The following are ONLY the highlights. There’s much more to see.

SS Thistlegorm: This English cargo ship (423 ft/129 m) was bombed by German aviation in October 1941 while transporting supplies destined for the British in Alexandria (armoured vehicles, motorcycles, jeeps, trucks, rolling stock, airplane parts, stacks of rifles, radio equipment, munitions, and a plentiful supply of wellington boots). Now she is an artificial reef and home to an enormous variety of marine life.

Rosalie Moeller: Rosalie Moeller is sister ship to SS Thistlegorm. Also bombed and sunk in October 1941 she lies in 180 ft/55 m on a sandy bottom. Hard and soft corals are covering the hull and a variety of marine (barracudas, tunas, jacks, trevallies, glass fish, scorpion fish and groupers) call her “home”.

Kingston: also a British cargo ship, but sunk in February 1881. Well-lit and at a shallow depth, this wreck is easily accessible. The remains of the engine room with the boiler are still nicely visible. The fauna here is particularly interesting: surgeonfish, nudibranchs, jackfish, groupers, snappers, turtles, white tip reef sharks and eagle rays … and schools of dolphins which are regularly spotted.

Dunraven: The Dunraven, a Victorian steam & sail ship, was carrying spices, cotton and timber from India when she hit a reef in 1876. Inside the wreck are schools of yellow goat fish and giant morays. The hull on the top is covered with corals and full of marine life, like schools of bat fish, nudibranchs, pipe fish and the very rare ghost pipe fish.

Ras Mohamed National Park: Protected since 1983, the jewels of the park are Shark Reef and Yolanda Reef. The dive sites in Ras Mohamed offer an abundance of reef fish life, scorpion fish, multiple macro critters, hard and soft corals. The whole area is a big fish territory and there’s scads of shark action.

Shaab Umm Usk:  an awesome coral garden with many different soft and hard coral species. Acropora is present in different forms, such as antler, table and spreading formations. There are an abundance of parrotfish, snapper, wrasse, emperor, butterflies, angles, fusiliers, surgeons and big groupers.

Abu Nuhas: Also known as 'Ships graveyard', is located close to the busy shipping lanes of the Gulf of Suez. Four wrecks are lying in a chain on a sandy bottom of a steep sloping reef covered with table corals.

Ghiannis D: ran aground on the reef on 19th April 1984 (our Dominick & his crew came upon the wreck shortly after the incident !) You can explore the bridge deck, an enormous winch and the bollard, view the narrow portholes leading into the engine room … but the mid-ship resembles a scrap heap. Crocodile fish, scorpion fish, parrot fish and groupers call the vessel home.

Jackson Reef:  the northern most reef in Tiran and is well known for the Cypriot cargo ship “The Lara” which sank in 1985 (yes, Dom was there for that one, too). Some remains of the wreckage can still be seen on the top of the reef. The west site has a forest of spectacular gorgonian fan coral in 65 – 100 ft/20 t- 30 m as well as many different kinds of reef fish. The most spectacular and colorful coral garden is at the southwest site 50 ft/15 m. It is very common to see turtles, white tips and grey reef sharks.

Woodhouse Reef: is the longest reef in the Strait of Tiran and the home to reef sharks and eagle rays. At the southern part of the reef is a wall to about 100 ft/30 m covered with coral from the surface all the way down. Along the reef is a canyon in 82 ft/25m which spreads out into a coral garden with sand alleys. 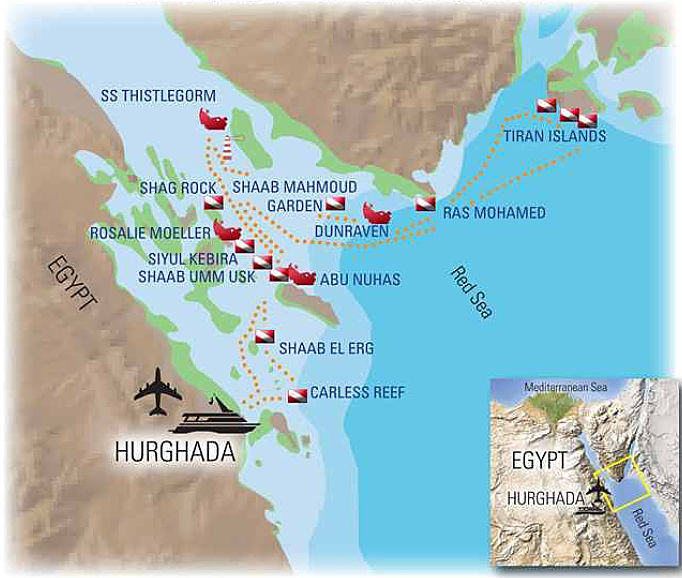 Take your international flights to Hurghada International Airport (HRG),  The Red Sea Aggressor II operates from downtown Hurghada at the Hurghada Marina, 25 minutes from the airport. Airport transfers are included, if you are arriving and departing from the Hurghada International Airport on journey start & end dates). You will be met at the airport and transferred to the yacht and you may board the yacht Saturday afternoon anytime after 3pm and throughout the evening. The yacht will depart the dock early Sunday morning after the Port Authorities have checked all guest's passports. After clearance has been given, no one can board the boat.

At the end of your cruise, the yacht returns back Hurghada New Marina Friday afternoon between 2 & 4 pm. Friday evening after the sunset cocktail party, guests may go ashore and enjoy one of the many fine restaurants, cafes or pubs in the marina. This meal is not included in your cruise rate. Check-out is Saturday morning at 8 am.