A note from Dom  ... Enigmatic Oman

While working on a Red Sea liveaboard many, many "moons" ago, we ventured out to explore most of the underwater treasures that were within our reach  ... but, Oman is a destination we missed.   If you've dived all the hot spots and are seeking something new & different, Oman could be the answer.  You'll find the land itself exotic and the diving rich in corals, fish & pelagics,  The water is notoriously rich in nutrients, making wide-angle phtography a challenge ..... read more ...

Although not in a position to speak personally about the diving here, I can tell you what friends and colleagues have reported, which is that that corals are super healthy and the schools of fish (mainly big fish) are still enormous.   Everyone admits, however, that the diving here is best for divers who aren't looking for perfect photo ops, particularly wide-angle shots.  The water is so rich in plankton and other nutrients that you're unlikely to capture fabulous shots of the schools of barracuda and jacks swirling around you... or of the humpback mothers & calves.     Just let yourself be carried away by the experience

This is an area that apparently & miraculously hasn't been overfished and is truly teeming with life .... A good option to consider.  Check it all out here if you're ready to hear more, I'm an email or phone call away and will respond to your request with any additional details that you wish.      Cheers, Dom

If you know anything about the diving here, you'll know that the waters are extremely nutrient-rich which is what keeps the marine life so healthy & happy.  In other words, you'll be giving up visibility but getting huge schools of super-sized fish along with healthy corals.

In addition to the underwater world Oman has lots to offer on terra firma .... rugged mountain landscapes, beautiful oases, long stretches of beach and welcoming people and a rich, vibrant culture. 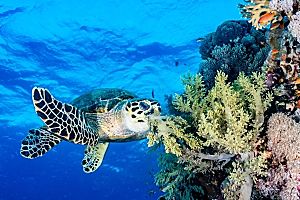 DAYMANIYAT ISLANDS: ... JULY 1 TO MID-AUGUST
These 7-night diving cruises through the group of 9 rocky Daymaniyat Islands will take you into Oman’s first Marine Reserve.  Amongst other things, these islands are well-known for their populations of nesting hawksbill and green turtles, healthy corals & immense schools of fish.  You’ll find sandy, relatively shallow sea beds facing Oman while you get some nice walls & drop-offs on the opposite side.  The corals are very rich and healthy and are one of the premier features of diving here.  There are areas where the soft coral colors are just ethereal .... soft orange, yellow and purple ... read more ...

You’ll find some critter life, but far less than in the neighboring Red Sea. The most common finds are crabs, crayfish, scorpionfish, stonefish, sea horses and reputedly some really large, colorful nudibranchs and the turtles are ubiquitous ... as are the morays.

And don’t despair. You’ll have plenty of the big guys, too ... huge stingrays & eagle rays, leopard sharks, bottlenose dolphins, spinner dolphins ... with the occasional passing humpback whale or mola mola appearing out of the blue. July to September tends to be the time for whale sharks, based on the plankton bloom at that time.

Do note that water temps can be cool as you go below 10 meters, due to thermoclines – so make your wetsuit choices carefully. Also, currents can be strong in places. 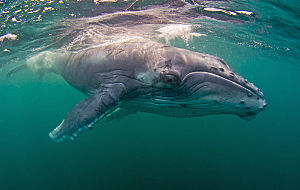 HALLANIYAT ISLANDS ... NOVEMBER TO MAY
A small archipelago of 5 islands located off the south eastern coast of Oman, offer divers an environment generally unaffected by the scourges which have damaged corals & marine life in other parts of the world. This is the area where the Oman Aggressor concentrates her diving much of the year.  The diving is somewhat exploratory, as many sites remain undiscovered due to the lack of diving tourism that exists here.  Perhaps the greatest excitement revolves around a resident population of humpback whales with the added attraction of possible encounters with sperm whales ... read more ...

Depending on conditions, you’ll enjoy some good wreck diving, too. The first ship sunk in WWI, the British cargo ship “City of Winchester”, sits in 28 - 30 metres of water in the Hallaniyat Islands. Interestingly, the hull has now collapsed, exposing the engine & boiler and divers will find all the ship’s remains graced with soft corals, anemones & fans ... and populated by scorpion fish, lion fish & honeycomb morays.

Take a look at what you can expect during the different seasona at Hallaniyat : November & December bring rays, giant catfish, mobulas, leopard sharks, schools of jacks, barracudas, morays eels, honeycomb morays, nudibranchs and fish in the thousands. Giant oceanic manta rays can be encountered. Close to shore there is plenty of kelp with fascinating animal life.

From January to March you can be almost guaranteed humpback whale encounters with their songs in the background while diving with giant groupers and the usual cast of characters.  In April, divers normally meet yellowfin, barracudas, schools of jacks, big rays, octopus, giant groupers, leopard sharks, milk fish, schools of dolphins and beautiful reef fish in the thousands ... as well as humpback whales. April can have strong currents. 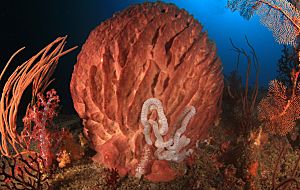 MUSANDAM PENINSULA ... SEPTEMBER & OCTOBER
Musandam is  not on liveaboard schedules at this time due to political issues in the region
At the northern tip of Oman, the Musandam peninsula offers a fjord-like geography on the Straits of Hormuz. The water is warm year-round and, as with Oman’s other regions, is chock full of life-sustaining nutrients which make the marine life sublimely happy and prolific ... and divers a tiny bit frustrated due to the viz. That being said, the visibility can change from hour to hour depending on the currents, so you just have to keep in mind that the abundance of marine life you encounter is due to the plankton and other nutrients in this environment. Do note that the currents at Musandam can be challenging and may be best suited to experienced divers.... read more ...

You’ll love the striking coral-covered drop-offs here as well as the amazing number of species represented at the dive sites. Thanks to the plankton and currents, you’ll be treated to great swells of pelagic fish (jacks, barracuda & king fish) and pelagic animals (manta rays, sting rays, marbled eagle rays, dolphins, mola mola & leopard sharks) ... as well as whale sharks in season (May to October).

And, as everywhere in Oman, the ever-present turtles ...

Limestone caves have alluring chambers & tunnels where you’ll find loads of lobsters, shrimp and other critters .... along with sharks & rays which like napping on the sandy bottom.

The Sultanate of Oman, on the Arabian Peninsula, encompasses vast deserts, sparkling oases & long coastlines, bordered by the United Arab Emirates, Saudi Arabia, Yemen, the Arabian Sea & Gulf of Oman. Two territories, Madha & Musandam, are bordered by the UAE and the Strait of Hormuz & Gulf of Oman.  The Omani Sultanate was previously a powerful empire, vying with Portugal & Britain for influence in the Persian Gulf & Indian Ocean.  Today, a significant portion of the economy is tourism along with trade of fish, dates & other produce.