The Maldives Aggressor II has an overall length of 41-meters (135-feet) and carries up to 22 divers. Her varied itineraries cover Central, South and deep South Atolls.

A word from Dom:  "Purpose-built for Maldives diving, this new Aggressor is sleek & stylish, with colorful decor ... an excellent example of a contemporary liveaboard.  All the typical Aggressor amenities included, of course.  I haven't been aboard yet but have had terrific feedback from clients who have done trips on her.."   ... Dominick Macan

ON BOARD MALDIVES AGGRESSOR II

Maldives Aggressor was purpose-built with a modern design and 4 decks of space for divers.  On the top deck, you'll find a group of sun loungers, a large covered lounge area with comfortable seating  ... as well as a Jacuzzi.  Just below that, on the upper deck (bridge deck) is another huge exterior lounge which is mostly covered but still offers the option of catching some rays.  Two of the large cabins, with picture windows, are located on this levelL. The main deck houses the spacious salon, an indoor dining area and a very large master suite with queen bed & panorama windows. This deck is home to a third & smaller exterior salon with cushioned seating and small tables.  On the lower deck are 6 twin cabins.

As is typical in the Maldives, all dives will be made from a custom-built diving dhoni (60 feet in length) that is very easy to dive from. It has ample space for divers, their equipment, photography equipment, hot water, a full bathroom and 5 compressors.

Depending on which cruise you choose, a visit to an inhabited island with a 'palm hike' and a barbecue on a desert island may be offered.  If your itinerary ends in Malé, (last diving day), a complimentary walking tour will be offered in the city and dinner is ashore that night at a waterfront restaurant.  It is approximately $35 pp and is the only meal not included in the price of your trip. 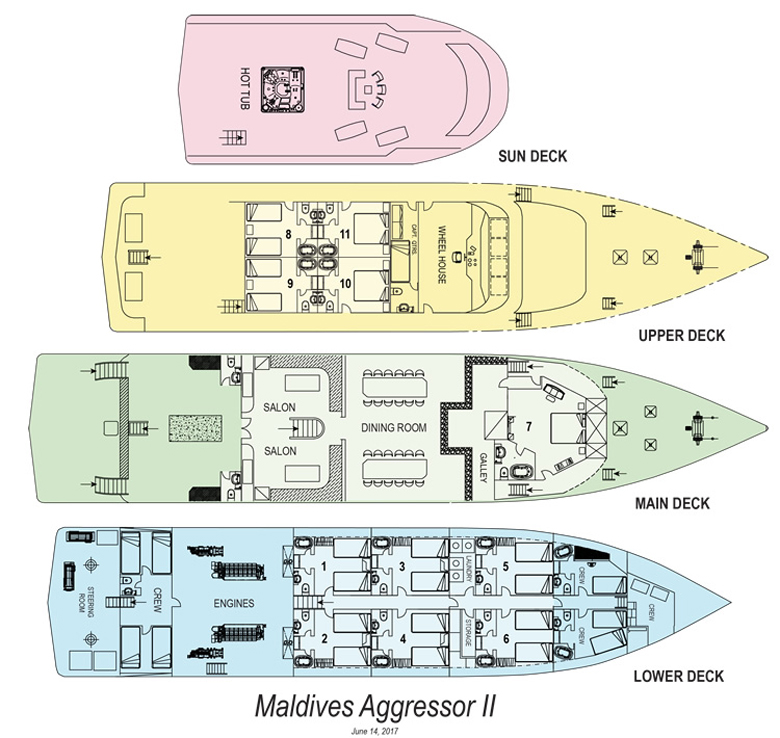 Built and maintained to the specifications of the local regulatory agencies and the regulations of the country of the flag.

The Maldives has been an Aggressor destination since 2009.

Maldives Aggressor concentrates on the classic diving of the Central Atolls with trips to the South and Deep South early each year (later January through mid-April.

View the highlights of these trips ....... open
The final itinerary is, of course, always dependent upon weather, sea conditions and where the best animal sightings are at any particular time of year

Best of the Maldives tours offer 7 and 10-night trips with 3 to 4 different classic routes that include the areas of: North Male, South Male, North Ari, South Ari, Vaavu and Rasdhoo ... and sometimes Baa Atoll.  You'll have spectacular channel-drift dives, wrecks, pinnacles and world famous night dives.  These routes begin and end in Male, the capital of the Maldives and run year-round.

Deep South & Southern Hemisphere itineraries are generally scheduled January through April and include 7-night charters which include mostly pelagic fauna. Reef sharks, whale sharks, oceanic mantas, tiger sharks, eagle rays and hammerheads but also some beautiful overhangs with soft corals, schools of reef fish & macro critters.  Depending on the itinerary you choose, you will most likely visit 2 of the following atolls : Vaavu, Meemu, Laamu, Thaa, Huvadhoo, Foammulah and Addu

CENTRAL ATOLLS will generally include 2 to 3 of the following, depending on the itinerary you choose:

South Ari Atoll: popular for its population of whale sharks. In season you’re likely to have the opportunity to snorkel with one or more. But, whale sharks aren’t all there is. You’ll find caves and overhangs, more sharks … plus fusiliers, angelfish, tuna & jacks, large sea fans, soft corals and an abundance of other marine life.

Thaa Atoll: known for both mantas and eagle rays and plenty of pelagic fish, there’s also a nice channel dive which often includes a few sharks, including occasionally some silvertips.

Foammulah: if you’re looking for sharky dives, you need look no further. Tiger sharks, thresher sharks, hammerheads and silky sharks can be found in this region … plus oceanic mantas. The currents can be wild, so, it’s strictly for advanced divers. If you’re in that category, this is thrilling stuff! There’s also a beautiful wall dive with more of the same characters and schools of pelagic fish.

Most itineraries leave from the Hulhumale Lagoon, which is a 15-minute boat ride from the Male International airport. Guests will be met at the airport by a crew member and transferred by water taxi (complimentary) to the yacht at 4 pm.  Cruise start check in is Sunday from 3.30pm  ... (or from 11:00 am weekdays on some itineraries) and all guest must be on board by 5pm.  After boarding, the yacht departs for its night anchorage to prepare for diving the next morning.  Depending on the itinerary, the checkout will be either on Sunday or during the week at 8 am.   If your cruise ends in Male, transportation is provided back to the Male International Airport after breakfast.