A note from Dom  ... The Magical Maldives

I have to say that the range of dive liveaboards in the Maldives is so extensive today that divers' choices are often made drawing straws !  But, the Maldives is a complex destination with much more to offer than many divers may guess.  What we aim to do at Dive Advice to put you in the right place, at the best time, on the precise boat that will give you the underwater experience you're looking for.             read more ...

The Maldives has always a major European dive destination, but it's only in the last 15 years that the rest of the world has really begun exploring these magical island atolls with a plentitude & variety of underwater life.  Plus, new routes have opened up ... particularly those to the south around the equator ... which boast abundant pelagics and require advanced diving skills.

I've found that wherever you go in this island chain, you have clear blue waters, beautiful light, dramatic underwater scenery, lots of fish and in many places some really zippy currents (which I love ).   Add to that, these waters have always been graced by plenty of the big guys that Maldives divers long for ... the mantas, the whale sharks .. and even sailfish !

Plus, the white, sandy beaches of these stunning atolls are genuinely as glittering as the photos you've seen!   If you are amongst the uninitiated, we've tried to provide a good overview here on the site ... so check it all out &  when you're ready, I'm an email away and will respond to your request immediately.     Cheers, Dom

Maldives scuba is known for "THE BIG GUYS" of the oceans, especially those alluring MANTAS & WHALE SHARKS, plus a wide variety of SHARKS, including the exotics such THRESHERS, OCEANIC WHITETIPS, even tigers in certain sites.  A diversity of FISH SPECIES add color excitement - triggerfish, sweetlips, angelfish, anthias, Moorish Idols and LARGE SCHOOLS of snappers, jacks, barracudas & fusiliers.  You'll explore CAVES, CAVERNS & OVERHANGS with lovely soft corals & bright sponges.  And, the energizing DRIFT DIVES through channels & passages into the atolls never cease to thrill divers.  And, then of course, there's all the TOP-SIDE MAGIC of these luscious, tropical atolls.

Now, for most divers, the Maldives conjures up images of swimming & flirting with swarms of great Manta Rays.  But diving in the Maldives is definitely more than that.

For starters, rising from the atoll floor, usually in the middle of channels, are 'thilas' or submerged reefs, which can be as shallow as 8-10 meters below the surface. Thilas make great dive sites as they are often small enough to swim around during one dive and have their own compact ecosystems, such as caves, overhangs, steep walls or cracks and crevices. Many are pinnacle formations.

You'll experience gentle dives & strong currents and even a couple of very good wreck dives. The Maldives has diving for everyone from the beginner to the advanced diver and is a destination ideal for divers and snorklers alike.

Do note that Maldives diving is more about abundant life than about colorful corals, but in most of the channels you'll find caves, caverns & overhangs with lovely soft corals, colorful sponges, invertebrates & gorgonian fans.

These areas also host cleaning stations where you'll observe the fascinating process of the small-fries cleaning large ocean species. Groupers, snappers, surgeonfish, eels, parrotfish, even Giant Napoleon Wrasse will install themselves in a quiet corner, while armies of wrasse, shrimp & other assorted cleaners pick at debris in their open gills & gaping mouths.

The rock pinnacles also provide rich diving & diverse life forms, while further afield from the reefs, you'll marvel at the pelagic action. Here on the edge of the open water, you find the manta rays & eagle rays in plentiful supply, along with multiple varieties of sharks.

The resorts in the Maldives are known for their sparkling white-sand beaches and elegantly romantic ambiance .... and we highly recommend a stay of 2 or 3 nights before or after a liveaboard trip.  If it's serious diving that you're really after, the resort day-boats can't get you to the sites you really want to experience.  Those sites are too far away from most populated atolls to be practical.  Liveaboard diving in the Maldives is the option for all serious divers. 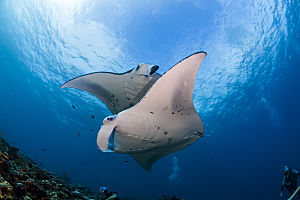 Far North - sharks, caves, wrecks & more sharks
Although there are only a few of the liveaboards which venture to the atolls of the Far North, this region offers tranquil surroundings and virtually guaranteed encounters with large numbers of sharks - white tip & black tip reef sharks, leopard sharks . . . and for the icing-on-the-cake . . . in the right season, hammerheads.  And true to Maldives fashion, there are plenty of the mysterious, other-worldly & ever sought-after Manta Rays. ... read more ...

You'll love the drift-dive rides, the great visibility and the surprising abundance of hard & soft corals, along with swirling schools of fusiliers & other colorful fish, plus lurking morays, lobsters and nudibranchs. There are also opportunities for cave and wreck diving.

So the far north offers something for everyone, is particularly attractive to the more experienced divers and those who wish to stay away from the crowds. 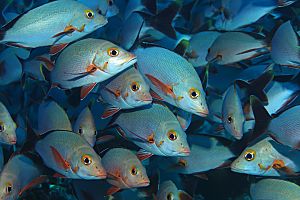 Northern Atolls - coral gardens, critters and mantas
As in the Far North, there are few boats here in the Northern Atolls and you are likely to be the only divers on a dive site. The draw here is the abundance and variety of marine life plus the equally interesting topography. Along with swim-throughs and overhangs and large schools of fish, you also get some very beautiful soft corals.  While sharks are rare in the north, at Noonu Atoll you should have exciting encounters with large numbers of grey reef sharks. ... read more ...

Baa Atoll, a submerged pinnacle, is exceptional for its incredible overhangs covered with splendid coral gardens with scintillating colors. You will swim directly beneath this amazing ceiling of glowing coral life.

And, when you've had enough of corals, you can move on to Baa Atoll's other attraction, the manta rays, as this is one of the best sites in the Maldives for viewing these magnificent beauties.

Lhaviyani Atoll is a vertical wall dive which arrives at a sandy bottom. As with many of the wall dives in the Maldives, you have you tons of smaller species of marine life - shrimps, gobies, nudis and the like - inhabiting the holes & hiding places along the wall while schools of medium-sized fish swirl or graze along and out in the nearby open waters you'll probably catch a glimpse of Napoleon wrasse, sting rays, eagle rays, devil rays, barracuda and tuna.

Most of the dives in this region are known for the variety of life, so be prepared to fill your memory cells (or photos cards) with a long list of exciting species! 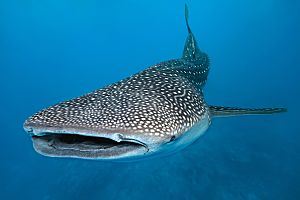 Central Atolls - channels, caves, drop-offs & superb pelagic action
Not far from the capitol, Male, is where most of the diving has traditionally been done,  North Male, South Male & Ari Atolls.  Without venturing far from your arrival point, you find channels & caves, massive coral tables & drop-offs, plus a great variety of marine life.  manta rays & a variety of sharks,  including whale sharks & hammerheads in season, are regular visitors ... read more ...

Most of the best liveaboards offer the Central Atolls for the majority of their cruises. The most popular areas include North Male (Kaafu), South Male (Dhaalu), and Ari (Alifu) & Felidhoo Atolls.

South Male Atoll has long been considered one of the finest diving areas in the Maldives. Dive sites in this area are graced with channels & caves & drop-offs & reefs - plus a great variety of marine life.

Well-known for giant anemones also, this area is popular with photographers who love those colorful shots of the anemones and their little guards, the anemone fish.

Ari Atoll is certainly one of the popular dives for serious divers. With multiple thilas both inside and outside the lagoons, this area lures loads of pelagics. Manta rays, plus a variety of sharks, including whale sharks & hammerheads, are regular visitors here and there are several of the ever popular cleaning stations.

Maaya Thila, a favorite for many divers, is located at Ari Atoll. This pinnacle offers a marvelous assortment of life. Get your camera ready for brightly colored nudibranchs, giant frogfish, turtles & even the elusive guitar shark!

Felidhoo Atoll is home to a site known as a photographers' paradise, where soft and hard coral overhangs shelter schools of sweetlips and you'll also get a variety of sharks and Titan Triggerfish, too.

At Mulaku Kandu (channel), when the currents are strong, the diving is great. Giant Trevally, Great Barracuda, White-tip and Black-tip Reef Sharks plus turtles come here to munch. 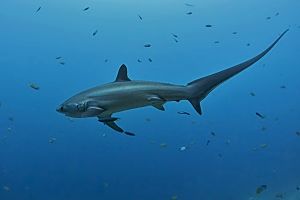 Far South - sharks, rays, plentiful fish & a great wreck
With superb visibility, the deep south offers warm waters & healthy corals, including hard corals & scads of anemones.   The big draw, however, is the large quantity of ocean predators which are attracted into the channels to feast on the schools of smaller reef fish hanging out on the walls & submerged thilas: black tip, white tip, grey reef sharks, leopard & nurse sharks are common.  Trips to the Far South, to the remote & unspoiled atolls of Huvadhoo, Gan and other smaller atolls straddling the equator, are a relatively recent phenomenon in the Maldives. It was the opening of the international airport at Gan, which made access to this alluring region so much easier. ... read more ...

Large pods of dolphins are not unusual at certain sites and you almost always have whale sharks at some as well as tiger sharks, hammer heads, giant hammerheads, eagle rays, sting rays and mobula rays.   Even sailfish appear for the really lucky divers.

Depending on the itinerary, which is very weather and current dependent, you should also encounter Manta cleaning stations with lots of activity.  Of course, you get countless turtles, plus tuna, jacks and snappers, colorful coral groupers, angelfish, puffer fish, bannerfish and trigger fish and plenty of anemones with resident damsel fishes and beautiful coral fish.

Much of the diving is in channels, so is very dependent on the current. When it's running well, you'll have exhilarating drift dives.

If you love wrecks, some of the cruises include the wreck of the coral encrusted British Loyalty, torpedoed by the Japanese in 1944, which lies inside the atoll in the Hithadhoo region and is an excellent wreck dive.  She brings plenty of pelagics in from the blue - hammerheads, mantas, grey reef sharks, eagle rays and loads of turtles.

All in all, it's highly recommended diving and you're virtually guaranteed to be the only liveaboard at each site.

The Maldives Islands lie in the Arabian Sea portions of the Indian Ocean, southwest of Sri Lanka and India, about 700 kilometres (430 miles) from the Asian continent's mainland.  The chain of 26 atolls stretches from Ihavandhippolhu Atoll in the north to Addu Atoll in the south (across the Equator). The total territory is roughly 298 square kilometres (115 square miles),  Maldives is one of the smallest Asian countries by land area and population, with around 516,000 inhabitants. Malé is the capital and the most populated city, traditionally called the "King's Island" where the ancient royal dynasties ruled for its central location.