A note from Dom  ... Mesmerizing Malaysia

For me, there's just something about being in and around Borneo.  Like Papua New Guinea, in my mind, it just conjures up ephemeral visions of wild, untouched and magnificent jungle land crawling with adventure.  Malaysia's neighbors, Thailand and Indonesia, with their excellent diving infrastructures, get far more attention than enchanting Malaysia  ...  yet, the diving here is great.       read more ...

There's extraordinary muck diving ... and at the other end of the spectrum, some awesome big animal encounters.   And, of course, if you're already an experienced diver, you'll know that, for exquisitely unusual sea creatures, there are few places more wonderful than the paradisical Sipadan and Kapalai Islands.  The flip side to this IS the lack of diving infrastructure. There's one very budget liveaboard and the resorts can be a chore to get to.  But, trust me.  The diving is worth it !

Read our Malaysia page and .... when you're ready to hear more, I'm an email away and will respond to your request with any additional details that you wish.     Cheers, Dom

Known for weird & wonderful CRITTERS & swirling schools of pelagic fish, Malaysia will treat you to STEEP WALLS plus drop offs, overhangs, caves & crevices, positively FIRST-RATE CORALS & gigantic gorgonians.  You'll see copious quantities of REEF FISH pulsating PELAGIC ACTION, giant groupers, tuna, surgeonfish and jacks.  Add in a surprising variety of SHARK SPECIES ...including leopards, whitetips & threshers. To top it off, some superb MUCK DIVING with an extensive array of captivating critters. And, the frosting on the cake –a profusion of SCHOOLING HAMMERHEADS at Layang-Layang.

While there is some pleasant diving along the east coast of the Malay peninsula, Malaysia's world-class diving is done in the waters around the magical island of Borneo.

Borneo, the third-largest island in the world, is split between 3 nations, with roughly half of it belonging to Malaysia.   Kalimantan on the east of the island, belongs to Indonesia; Sabah and Sarawak are Malaysian states, which lie on the west side of the island of Borneo; while a tiny corner of the island is independent of the two larger powers, remaining the sultanate of Brunei.

This part of the diving world is blessed with nearly untouched coral reefs but with less infrastructure than you find in Indonesia & the Philippines, making access to the diving a bit more challenging. There's a lack of liveaboards serving this area, so most of what we recommend is land-based diving where you have day-boat access to the sites.

The areas you'll want to explore are located around the islands of Sipadan, Layang-Layang, Langkawi, Mabul and Kapalai.

JOURNEY INTO THE JUNGLE

Don't forget that land excursions here are also exciting and heartwarming .... especially if you can take the time to visit an Orang Utan rehabilitation center where dedicated professionals help to reintroduce to the forest animals whose mothers were destroyed by poachers or who had been held captive in people's homes.

This emotionally-charged experience is highly recommended.

CHOOSE FROM 2 MALAYSIA OPTIONS OR INCLUDE BOTH 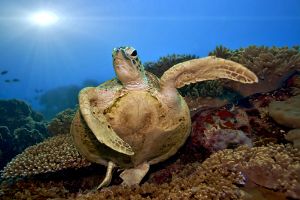 Sipadan, Mabul & Kapalai  ...  world-class corals, critters & pelagics
A coral island on top of an extinct volcano, Sipadan is graced with steep drop-offs which form a 600 meter wall. The corals are world-class & with the drop-offs, which are washed by upwelling currents carrying rich nutrients, you get superb pelagic action at the same site as corals & critters.  An astonishing number of Green turtles are resident here and the water is teeming with schools of fascinating bumphead parrotfish, large schools of barracuda and trevally .... grey & whitetip reef sharks, leopard sharks, bamboo sharks, even thresher sharks, white tip sharks, eagle rays, mantas &  marble rays.  The frosting on the cake, the intriguing scalloped hammerhead! ... read more ....

Gorgonians and sponges grow to amazing sizes and you'll find giant groupers, tuna, surgeonfish and jacks milling around them .... and you'll explore overhangs, caves and crevices.
In the lagoon, you can find beautiful hard corals – including some great specimens of brain coral. which attract smaller fish.

In spite of the fact that Mabul and Kapalai are very near to Sipadan, the diving you'll find at these islands is quite another world. With their sloping shelves carpeted with runoff from tropical rain and rivers, with coral rubble and grass seabeds, here you get some of the ultimate of "muck".

See both our liveaboard & land-based diving sections for our recommended operators in this region. 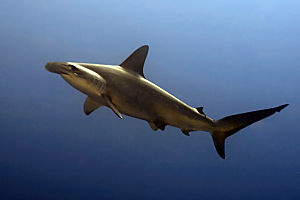 Layang-Layang - from macro to hammerheads
Everything from massive schools of scalloped hammerhead sharks to some of the most intriguing muck diving in the world, these islands, in spite of their relative proximity, offer divers diversity almost beyond belief.  A very small oceanic atoll, Layang Layang, is known for its healthy corals and astonishingly large schools of scalloped hammerheads. Although the hammerheads are the main draw for many divers, the corals are magnificent and there are plenty of pelagic fish in the area as well as angelfish, butterflyfish, batfish, triggerfish and other colorful species. ... read more ...

The Malay Peninsula is the world's largest peninsula.  Singapore occupies the southen tip & the Thai border is at the north.   Malaysia has a western maritime border with Indonesia’s Sumatra Island while to the east lies Borneo, which is shared by Malaysia, Indonesia & Brunei.   The islands of Sipadan, Kapalai & Mabul, which offer exceptional diving, are just off the eastern coast of Borneo, in the Celebes Sea, not far from Indonesia's north Sulawesi.   Layang-Layang, with its intriguing population of hammerheads, lies northwest of Borneo.