Galapagos Master is 32 meters (105 feet) and takes 16 divers in 9 cabins, taking her guests to the best of Galapagos, including Darwin & Wolf.  She offers 7 & 10 night adventures.

A word from Dom :  " Completely rebuilt from the keel upwards in 2015, Galapagos Master was thoughtfully fitted out to ensure diving experiences serious divers & photographers are looking for. She's sturdy, she's comfortable, she's one of our favorite liveaboards.  Highly recommended ...."  Dominick Macan

ON BOARD GALAPAGOS MASTER

ALL YOU NEED FOR GALAPAGOS DIVING

Relaxed & comfortable, this dive liveaboard offers everything a diver wants.  For those who want to catch a few rays of sun, there is a top level sun-deck and also an upper level bow area - each with lounge chairs. The upper level also has an outdoor shaded seating area with benches & cushioned loungers.  There's a good-sized interior lounge with plasma screen and a separate indoor dining area complete with cocktail bar.

Seeking a bit of quiet time? There's a small library which also has an entertainment center for your enjoyment.  The cabins are located on all three decks ... 4 on the top deck, one on the main deck and 4 more on the lower deck

An indoor camera set-up station, with numerous charging points (US flat pin plug) and storage drawers is situated to the rear providing ample room for a full photography charter group. Further camera preparation areas can be found on the rear deck next to the dive deck.

The dive equipment is on the the lower level aft deck. You'll find individual set up areas, with under bench storage for all your personal items. Rinse tanks are conveniently located for washing dive equipment and camera gear, and there are 2 shower heads for those wishing for a quick post-dive rinse down.

As the Galapagos Islands offer exotic land animals as well as magical marine life, you'll also have the opportunity on Master cruises to enjoy island visits at North Seymour, Santa Cruz or Isla Isabela for viewing the weird & wonderful creatures of this natural animal park. 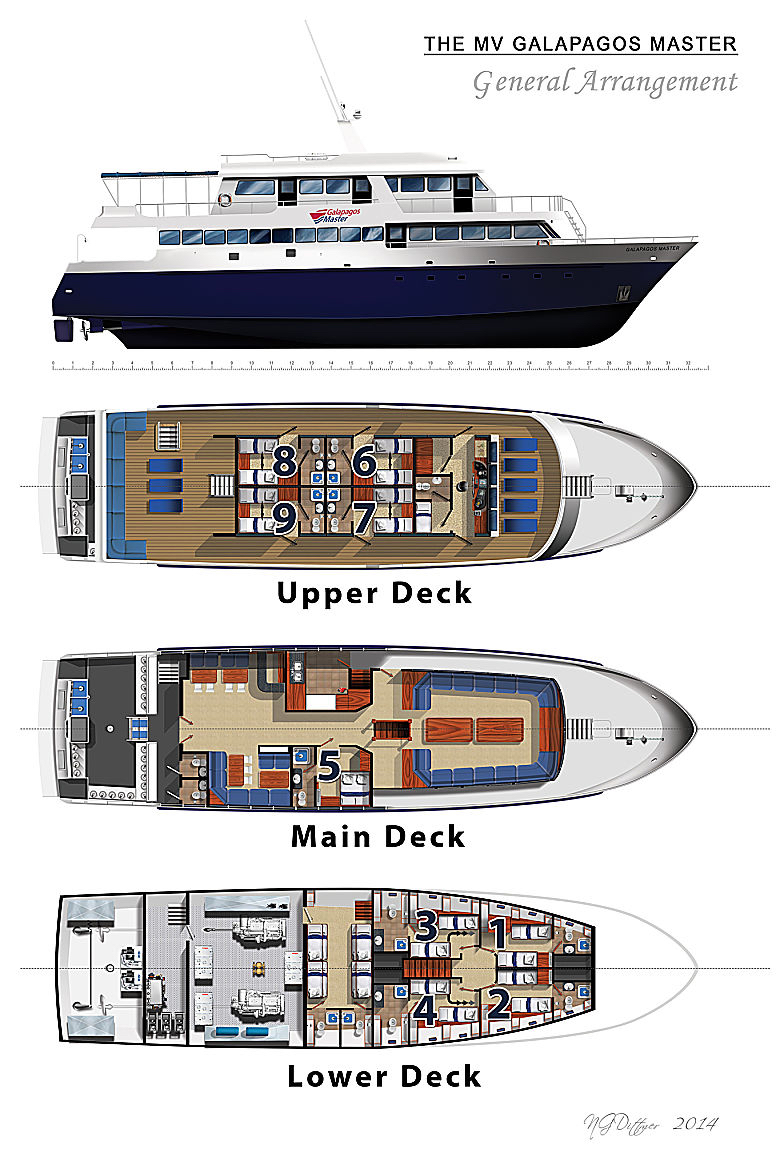 Aboard Galapagos Master you'll have up to 4 dives per day .... including at Darwin & Wolf.  The exact itinerary is always weather and conditions dependent ... however, this itinerary is valid unless conditions dictate a change and the plan will always be to visit the best of Galapagos diving.

Itinerary & itinerary map for Galapagos Master... ...   open
On a typical day you'll have up to 4 day dives, although a night dive may be substituted for the 4th day-dive when the boat is anchored within a sheltered cove.

The typical diving day aboard the Galapagos Master follows:

To allow guests to explore the Galapagos to its fullest, on days 2, 7 and 10, dives 3 and 4 will be substituted by  island visits at North Seymour, Santa Cruz or Isla Isabela.

Punta Carrion – You’ll get larger pelagics here including white tip reef sharks, occasional hammerheads and Galapagos sharks. Sea lions are ever-present and there is the opportunity for some macro critter spotting with sightings of neon nudibranchs. Mild to medium current is to be expected.

Wolf Island – You’ll have selection of reefs & walls, medium to strong currents where the use of gloves and reef hooks is advised. Schooling pelagics are the main draw with sightings of hammerheads, white tips and Galapagos sharks at each site. During the season (May – November) whale sharks may also be seen here. Be on the lookout for red-lipped batfish, barracudas, moray eels and dolphins.

Darwin Island – Perhaps the most famed dive site is “Darwin’s Arch” which provides an amazing drift dive along the wall at an average depth of just 9m. Medium to strong currents bring with them hammerheads, black tips, silky and Galapagos sharks in large numbers! Schools of jacks are a common sight, along with turtles, angelfish and moray eels. Occasional sightings of tiger sharks, manta rays and bottle nose dolphins add to the thrill. Whale sharks may also be seen between May – November.

Douglas Cape – A wall dive, with an average depth of 20m (70ft), is famed for the feeding marine iguanas that congregate here along with sea lions, fur seals and rocketing penguins.

Punta Vicente Roca – Alternatively known as “The Ice Box”, due to its chilling thermoclines, this point off the Northwest coast of Isabela Island offers a wall drift dive, along which mola mola can be spotted.

Roca Redonda – This underwater volcano, with its bubbling streams of natural gas (fumaroles) is home to schools hammerheads sharks and barracuda. With typically strong, changeable currents as well as some down currents, the diving here is challenging, though with an average depth of 18m (60ft).

Cabo Marshall –The craggy volcanic walls are covered with black coral and the sheer variety of marine life is astounding. Sightings of manta, mobula and cownose rays are to be expected during the warm season (November – May). Meanwhile shark varieties include scalloped hammerhead, Galapagos and white tips. Of course, you’ll also see the ubiquitous sea lions and turtles.

Cousin’s Rock – One of the most photographically productive dives of the region, Cousin’s Rock is formed of coral covered rock and lava flow. Sea fans, hydroid bushes, red sponges and small hard corals encrust ledges and overhangs sheltering hawkfish, nudibranchs, frogfish and seahorses. Plenty of larger visitors are also seen including giant manta and mobula rays, spotted eagle rays and hammerhead sharks. The wall drops beyond 30m (100ft) but rises up shallow to just 3m (10ft) providing an ideal spot to end your dive playing with the sea lions. 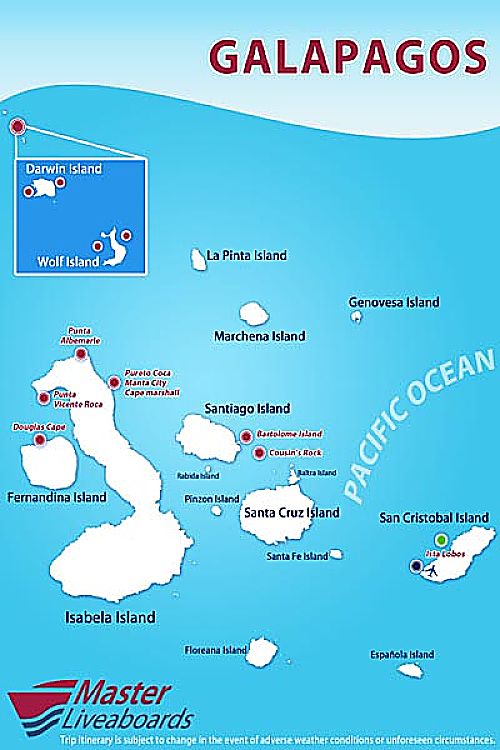 The Galapagos Master embarks and disembarks at the island of San Cristóbal. Book your international flight into and out of Quito or Guayaquil International Airport in Ecuador.  Most international flights arrive into Guayaquil or Quito after the domestic connection to San Cristóbal (Galapagos) has departed, making an overnight stay a necessity. But, in any case, we recommend that guests spend a night in Quito or Guayaquil before the trip to ensure making connections and collecting all baggage.

From Guayaquil and Quito there are daily domestic flights to San Cristóbal (SCY). A Galapagos Master representative will meet you at the San Cristobal airport and you'll be taken to the boat for lunch, then a check-out dive. After disembarkation on Monday morning, you'll enjoy a visit to the Interpretation Center on San Cristobal before being transferred to the airport.