The Calipso is a 100-foot (33-meter) yacht, which has recently completed a full refit & her operation started in August 2019. She is a spacious boat with capacity for 16 divers diving Galapagos.

A word from Dom: "Calipso is a very interesting new dive liveaboard option for Galapagos.  I've known & worked with this boat for years as a Naturalist boat and she's always been a fantastic choice, absolutely top quality.  Since her extensive refit & transition to a dive liveaboard, we've had fantastic reviews from her trips.  She's fast becoming the top contender in the Galapagos dive market."  ... Dominick Macan

AN OLD FAVORITE IN A NEW LIFE

Long a favorite for naturalist cruises in Galapagos, Calipso (formerly the Flamingo) is beginning a new life as a scuba diving vessel following a complete make-over: new motors, new generators, new compressors and Nitrox system, plus a total rebuild on the interior and the sundeck, with the addition of a Jacuzzi.  The dive deck is all new and has camera tables, rinse tanks, hot showers and a head.

Sun lovers and those who wish to enjoy the scenery will enjoy the large sun deck, which has covered & uncovered options, the hot tub, a bar & barbecue.  On the upper deck, behind the bridge, are 6 of the cabins, all with large windows.  The main deck houses 2 forward cabins, a huge lounge and dining area with flat screen TV.  At the stern, on this level, is the new 450 square-foot dive platform.  The last 2 cabins are located on the lower deck and will be used for single divers with no single supplement.

Calipso produces its own fresh water through reverse osmosis desalinization units that are free of R-12 gas, so they offset their carbon emissions. There is a satellite telephone to provide your family with a contact number in the event of an emergency and WiFi is available at an extra cost.

Thursday
AM: This morning, you will fly from the mainland of Ecuador to San Cristobal, Galapagos and boat representatives will be there to greet you and escort you to the yacht.
PM: After getting settled in, you will have lunch and briefings, followed by a check-out dive at Isla Lobos. Lobo is Spanish for wolf and sea lion is lobo del mar in Spanish. Expect to see sea lions. Sail overnight

Friday
AM: Punta Carrion is located on the island of Santa Cruz. Sometimes you get lucky and see mola mola here. It’s a good first dive to acclimatize to Galapagos diving
PM: Seymour is an island known for having great dives. Sightings include mobulas, white tip reef sharks, Galapagos sharks, sometimes Hammerheads and many fish species.

Saturday
AM: Wolf & Darwin are known for having the largest biomass of sharks on the planet. Wolf is located 115 miles north of the central islands. Although no land visits are allowed, you’re likely to see all or most of the birds which flock to this island including all 3 types of boobies: Red footed, blue footed and Nazca, boobies … plus frigates, pelicans, lava gulls and red billed tropic birds.
PM: Sightings include huge schools of hammerhead sharks, Galapagos sharks, whale sharks (in season), silky sharks, eagle rays, sea lions, fur seals, mantas, turtles, jacks, trumpet fish, butterfly fish, Moorish idols, moray eels and dolphins. Some sites at Wolf are covered in coral sport a variety of tropical fish species. Dive sites include Shark Bay, The Landslide, La Banana and Islote La Ventana.

Sunday
AM & PM dives at Darwin.  Darwin’s Arch is an icon, the symbol of diving the Galapagos. As in the waters surrounding Wolf, here you’ll find massive schools of Hammerheads. In the later months of the year, huge, pregnant whale sharks pass through this area. Also, Darwin is the warmest dive site in Galapagos due to the tropical Panama current. You will spend a lot of the dive at a platform that drops into the blue. Here you’ll see hammerheads swim against the current. It’s like being on the side of a Hammerhead highway watching traffic pass. You leave the platform to swim out into the blue when a whale shark is spotted. That sometimes means swimming through the Hammerheads, a truly magnificent experience you will never forget.

Monday
AM: You have 2 more dives at Darwin in the morning.
PM: You have 1-2 more dives at Wolf in the afternoon. There is an optional night dive at the Anchorage site where you’ll find a sandy bottom and may see garden eels and the red-lipped batfish

July - December: Fernandina Island is an active volcano. It has erupted twice in the last decade and is the ‘hot spot’ in Galapagos.
AM: Cabo Douglas, Fernandina. This is the only site on liveaboard itineraries where you can see diving marine Iguanas feeding underwater. You also see penguins feeding on tiny silver sardines using schools of black striped salemas as cover. Turtles are especially abundant at Cabo Douglas.
PM: Punta Vicente Roca (Isabela Island). Punta Vicente Roca is a mola mola (sunfish) cleaning station, has large turtle populations, the endemic Galapagos bullhead shark, penguins, sea horses, sea lions and many species of fish not found elsewhere in Galapagos. It is not uncommon to find yourself diving with an endemic flightless cormorant.

Wednesday
AM: Cousins Rock. Cousins is a small rock, the remains of an eroded crater sticking up out of the sea. On the eastern side, the rock cascades down in a series of recessed ledges strewn with black coral, which is bright green under the water. Taking cover in the coral, you may find seahorses, frogfish, octopus, turtles and the elusive longnose hawkfish. It’s not unusual to spot pelagics from Cousins including mantas, eagle rays, mobulas and hammerhead. 1-2 dives here.
PM: You disembark and head for a reserve in the Santa Cruz Highlands to see the iconic Galapagos Tortoise in its natural habitat. After the Highlands, you descend into the largest town in Galapagos, Puerto Ayora. You may opt to visit the Charles Darwin Research Center in the Galapagos National Park or wander about town.  Dinner will be at a restaurant in Puerto Ayora. You then return to Calipso and sail to San Cristobal overnight.

Thursday
AM: You will disembark and are free to visit the Interpretation Center or wander around port before to the airport for your departure. 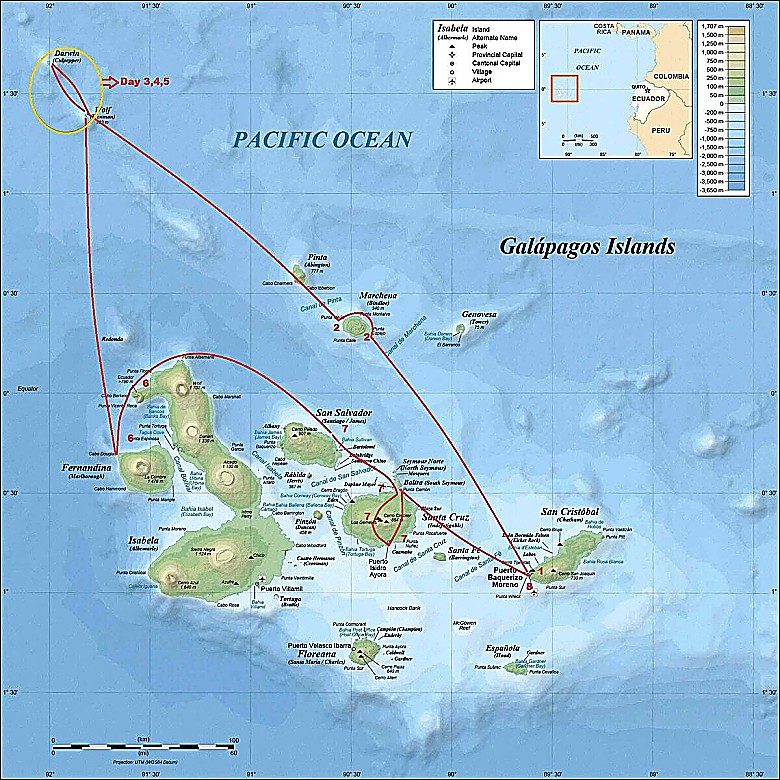 Ecuador has 2 international airports: Quito (airport code UIO) and Guayaquil (airport code GYE). Most international flights arrive in the evening so you'll want to plan an overnight hotel.   It is always safer to arrive early to make certain your luggage arrives, too.

You'll fly to San Cristobal in Galapagos in the morning. All flights to Galapagos from Quito route through Guayaquil. You do not deplane and the wait is typically only 20 minutes or so.  If you make your own way to San Cristobal, you'll want to plan to arrive at the passenger dock in San Cristobal no later than 1:00 PM on the day of departure. There is a Gazebo at the end of the dock where you can wait with your luggage and you will be escorted by panga (Zodiac RIB) to Calipso.