Itemata offers classic catamaran comfort. She's 18 meters (59 feet) and accommodates a maximum of 6 divers with all the space you need for comfortable lounging and diving.

A word from Dom :  "For small groups with a minimum of 4 people, this is an exotic way to visit deliciously remote island groups.  You'll be charmed by your welcoming French-Canadian hosts ... who not only are experts in this region but who speak several languages and provide a true home-away-from-home experience."..... Dominick Macan

Itemata offers relaxed comfort & stability for diving the Tuamotus & Marquesas. Her tri-deck design offers adequate space for dining and lounging ... plus diving facilities. The upper deck provides a small but ideal place to view the surrounding tropical island vistas, while the main deck provides a dining area at the stern and delicious sunbathing on the large trampolines located at the front.  Cabins are functional and Itemata has been reconfigured to sleep 10 guests in 5 en-suite cabins with 220v electric current. Kayaks are available for your non-diving hours and there are many opportunities for shore visits and beach combing.

With French owners, there's little need to say that meals will be important ... and in this case very special. An article in Scuba Diving Magazine referred to Frederique's cuisine as "to die for". In addition, she is always happy to adapt to vegetarians, vegan, gluten-free, and other dietary restrictions.  Because these supplies are a bit of a challenge to secure in this island nation, a small additional fee may be asked for certain special items.

The diving can be challenging and Advanced Open Water certification or equivalent and at least 100 open water dives are recommended. 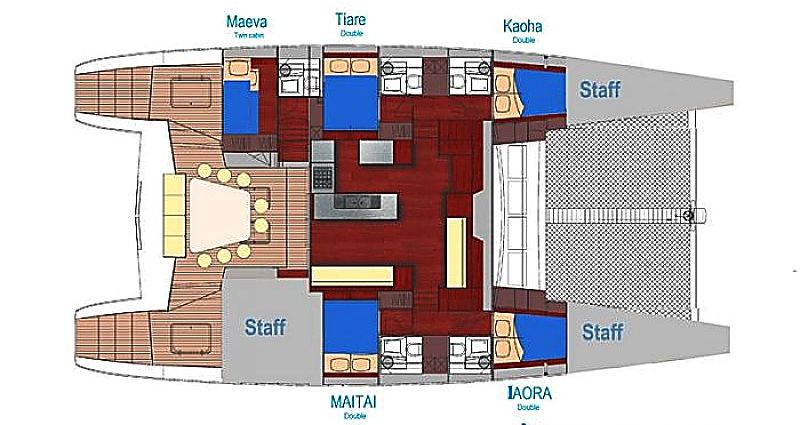 Itemata focuses on the Tuamotus & Rangiroa with occasional trips to the Marquesas custom itineraries are also offered on full charters. Cruises vary from 8-days to 16-days.

Highlights of these trips and an itinerary map....... open
The final itinerary is, of course, always dependant upon weather, sea conditions and where the best animal sightings are at any particular time of year

FAKARAVA / THE TUAMOTUS: The underwater life found in the channels is abundant and varied ... and in the lagoons, in particular, you'll find some glorious corals. You will encounter huge schools of sharks (large concentrations of gray sharks, but also white tips, black tips, sleepers, great hammerhead sharks and tigers. You will also see barracudas, eagle rays and manta rays, napoleon wrasse, as well as dolphins and a multitude of different schools of fish: big-eye snapper, goatfish, groupers, parrotfish, butterflyfish ... and lots of moray eels & turtles ... At certain times of the year, you can view passing humpback whales, melon-headed whales, whale sharks, giant groupers, schools of manta mobilae.

RANGIROA:  Rangiroa reef encircles a serene, aquamarine lagoon brimming with life. This is nearly identical to Fakarava in terms of being some of the most thrilling diving in the world. It happens in the two large passes which allow the flow of water between ocean and lagoon. Here you find sharks in unbelievable numbers. The species you are likely to encounter are grey reef sharks, silvertips, whitetips & blacktips ... lemon sharks & nurse sharks & tiger sharks .... silky sharks & great hammerheads.  You’ll also see manta rays, leopard rays & huge schools of eagle rays, big pods of dolphins (who love diver interaction) and if you're lucky, even the stray marlin. On the ocean side, the action is generated by the schools of Napoleon wrasses, barracudas, snappers, dogfish tuna, bigeye jacks . There are lovely lagoon dives also with beautiful corals, plenty of turtles, morays and reef fish (unicornfish, surgeonfish, paddletail snappers, fusiliers, kingfish, soldierfish ....). Mix in a few critters and you have super dives.

MARQUESAS: (private charter only)  As there are a handful of dive cruises per year in this region, so you'll find yourselves virtually alone with magnificent mantas, some measuring up to 16 feet across. You'll also see eagle rays, scalloped hammerheads, silky sharks, grey reef sharks, white tip & black tip reef sharks .... even the occasional tiger shark. In addition to the sharks, you find kingfish, tuna, napoleons, dolphins and swordfish. To top it off, not far from Nuku Hiva resides a colony of several hundred Pygmy killer whales and the rarely seen melonheaded whales. 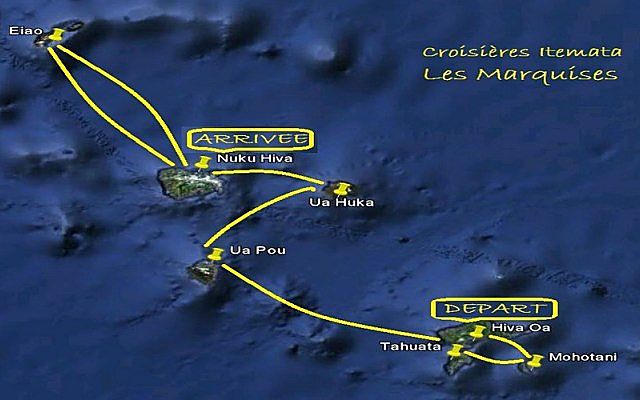 At the end of your cruise if you are not remaining in French Polynesia for additional nights after your cruise, please allow plenty of time for the transfer to the airport and check-in.

Itemata is not on the Live Search for Spaces

CONTACT US FOR INFORMATION OR TO BOOK A TRIP