A word from Dom: "Launching in July 2022, the Cayman Aggressor IV is an old friend which has been refit & revitalized returning to once again take us to alluring Cayman Islands diving.  A comfortable & relaxed way to dive this destination."  ..... Dominick Macan

ON BOARD CAYMAN AGGRESSOR IV


UNWIND IN THE CARIBBEAN SUN

For relaxing between the dives, you'll find a partially covered top sundeck with wet bar, CD equipment and a hot tub.  The main deck hosts a combination lounge/restaurant with room to settle in, watch movies, listen to music or work with your digital photography.   The very spacious master cabin is located at the bow of the main deck while 8 more cabins are located on the lower deck.

The menu on-board is varied and plentiful, with a variety of American feasts, barbecues and local cuisine. If you have any special dietary requirement please let us know when booking.

Breakfast (cooked to order), buffet lunch and an elegant meal at dinner are served with tableside service ... plus, you'll have fresh mid-morning and mid-afternoon snacks. Beverages such as tea, coffee and fruit juices are always available and both beer and local wines are complimentary. 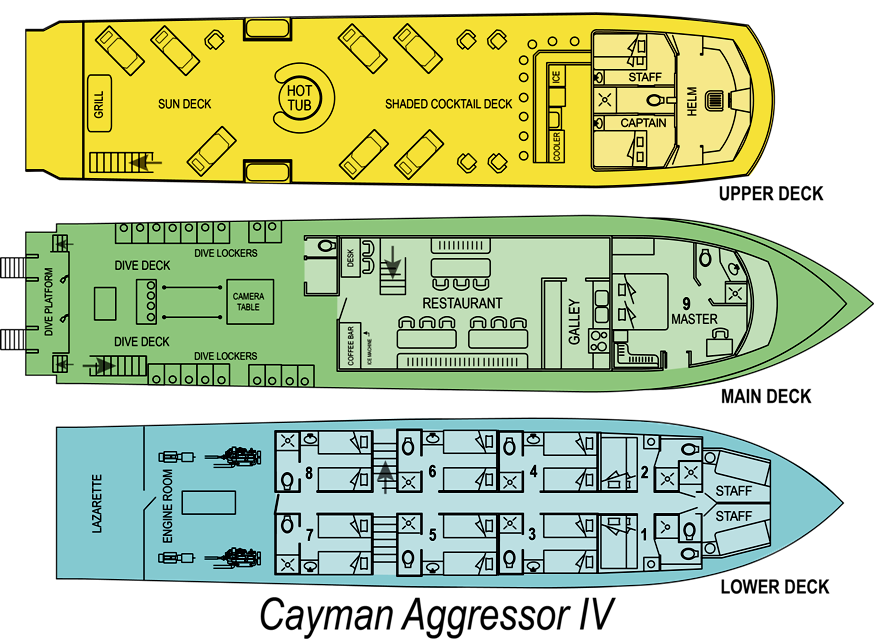 Captains and staff are professionally licensed as required by the laws of the country in which the yacht operates and complies with and the appropriate flag state regulations and/or SOLAS (International Convention for the Safety of Life at Sea) standards. All yachts are required to follow Aggressor Fleet® Standard Operations Procedures (SOP). Dive instructors and dive masters are trained and certified by international recognized certification agencies. Each receives proficiency training and annual inspections to review safety aspects.

Cayman Aggressor IV will take you on 7-day itineraries which include the highlights of Cayman diving featuring some great topography.

Itinerary map with diving summary  .... open
During the week, weather permitting, you will dive the best of all three islands including the Russian Destroyer (Kittiwake) in Cayman Brac, Bloody Bay Wall in Little Cayman, and Stingray City, Northwall, Southwall in Grand Cayman.

Topography reigns supreme here with walls, passages, pinnacles and swim throughs … all sporting colorful corals and sponges. Plenty of reef fish, turtles, eels & rays … a few sharks and some nice critter action. Continue reading for a few of the highlights.

Bonnie's Arch …. this site has a beautiful arch that provides photo ops. Look for seahorses, angelfish and crabs.

Bullwinkle East ... this site gets its name from the large elk horn coral that forms the top of this shallow reef.

Doc Poulson (wreck) … in an open sandy area, with nearby coral reef, the small vessel was sunk purposely to make a dive site. Good growth on the wreck provides a home to many juvenile fish including the pygmy file fish.

The Meadows … Jackson’s Wall is a highlight with swim-throughs onto the lovely wall. Watch for Caribbean reef sharks.

Lea Lea’s Lookout … A narrow cut leads to the wall where you can look for crabs and lobster hiding out. Divers love the “Great Room” (entrance around 80 feet) at this site where they exit at around 30 feet. Night dives here are great with reds, oranges, greens & purples shining in the low light.

Kittiwake & Keith Tibbetts … The Kittiwake, sunk in 2011 as an artificial reef, lies in 40-90 feet of water & provides a great backdrop for photos & videos. Penetration is allowed for the avid wreck diver & there are countless areas inside to explore. The Tibbetts is always a popular dive offering charming photo ops.

Ore Verde (wreck) … this wreck lies in pieces against a section of coral reef and provides a home to many fish, both during the day and at night (midnight blue parrotfish). Hordes of chub, jacks, and snapper are spotted during the day.

Randy’s Gazebo … wonderful swim-throughs & some of the largest barrel sponges in the Cayman Islands. A great “photo op” at the “gazebo … and a narrow passage that begins at 80 feet & “burps” you out at 30 feet are popular moments.

Stingray City … probably the Caribbean’s most popular (or only) 12-foot dive, Stingray City is home to many Southern Stingrays who seem to love performing for divers

Tarpon Alley … large sand passage slice through coral fingers, leading out onto the North Wall. Between two of these fingers, you can find tarpon displaying their buoyancy. Barracuda sometimes pose as “imposters”, lurking around, looking for a meal. On the wall, the beautiful spotted eagle ray is often cited as well as an occasional reef shark. If you are really lucky, you might spot a hammerhead. 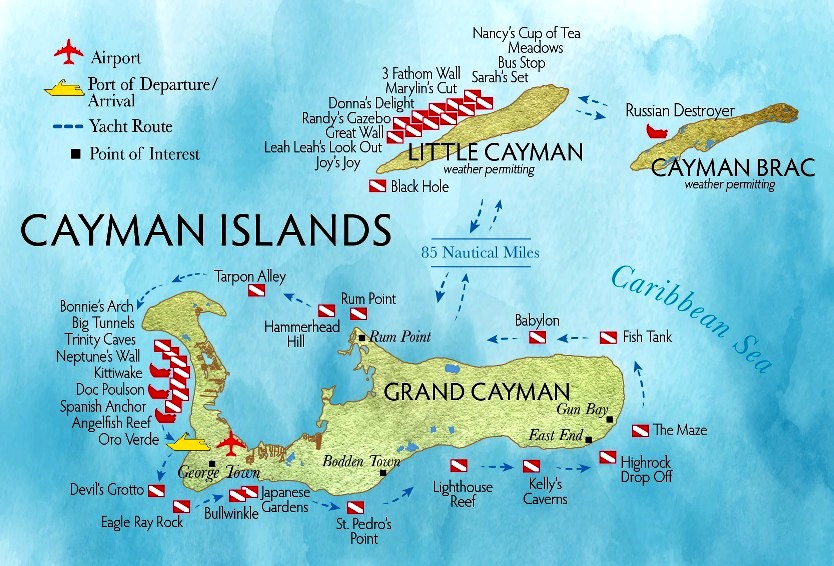 The Cayman Aggressor IV operates out of Grand Cayman (airport GCM). Guests arriving on Saturday from 11:30 am – 6 pm are greeted at the airport by a Cayman tour guide who will be wearing an Aggressor Adventures hat and shirt and will have guests names on a sign.  Airport transfers are an extra cost for these departures. At the end of your trip, the Captain will assist with organizing transportation to the airport (or hotel, if you are extending your stay). If you are already in Grand Cayman, please make your own way to the Cayman Aggressor IV any time after 4:00 p.m. Passengers can arrive up until the last flight Saturday evening. The yacht will depart the dock early Sunday morning.

The Cayman Aggressor IV normally docks at the George Town Tourist Dock, however, during the winter months, she occasionally docks at a local marina.   We will give you all necessary details before your departure.  On your return from the week of diving, you'll arrive at the George Town Government dock Friday afternoon after lunch. You can enjoy a stroll around town until it's time for the sunset cocktail party Friday night at 6 pm.  Dinner will be at a restaurant on shore and is not included in the rate.   Check-out is Saturday morning at 8 am.