The 40-meter (130-foot) Red Sea Aggressor III accommodates up to 24 guests. Her itineraries focus on the best of the southern Red Sea diving; the Brothers, Daedalus, Elphinstone & St Johns.

A word from Dom :  "One of my old stomping grounds, the southern Red Sea, should be on every serious diver's bucket list. I am certain that that you will find this latest Aggressor yacht offering great itineraries and ample opportunities to explore the riches of the sublime southern Red Sea. "...... Dominick Macan

ON BOARD RED SEA AGGRESSOR III

The main deck houses the ample dive deck  and an immense interior air-conditioned lounge, complete with TV, films, a marine library and a photo/video center. You can also enjoy nightly entertainment here, including  presentations, movies & games.  Meals (a combination of local and International cuisine) are served in the very contemporary restaurant on the main deck adjacent to the lounge. The remaining 8 cabins are located on the lower level.

The menu offers a variety of local & international cuisine. If you have any special dietary requirements, please add this to your reservation form. Mornings, you will find fresh fruits, hot entrees, cereals and juices. Lunches feature hot soups, homemade breads, salads and sandwiches and/or entrees. Dinners are served tableside and include salads, vegetables, seafood, beef or chicken with a fresh homemade dessert. 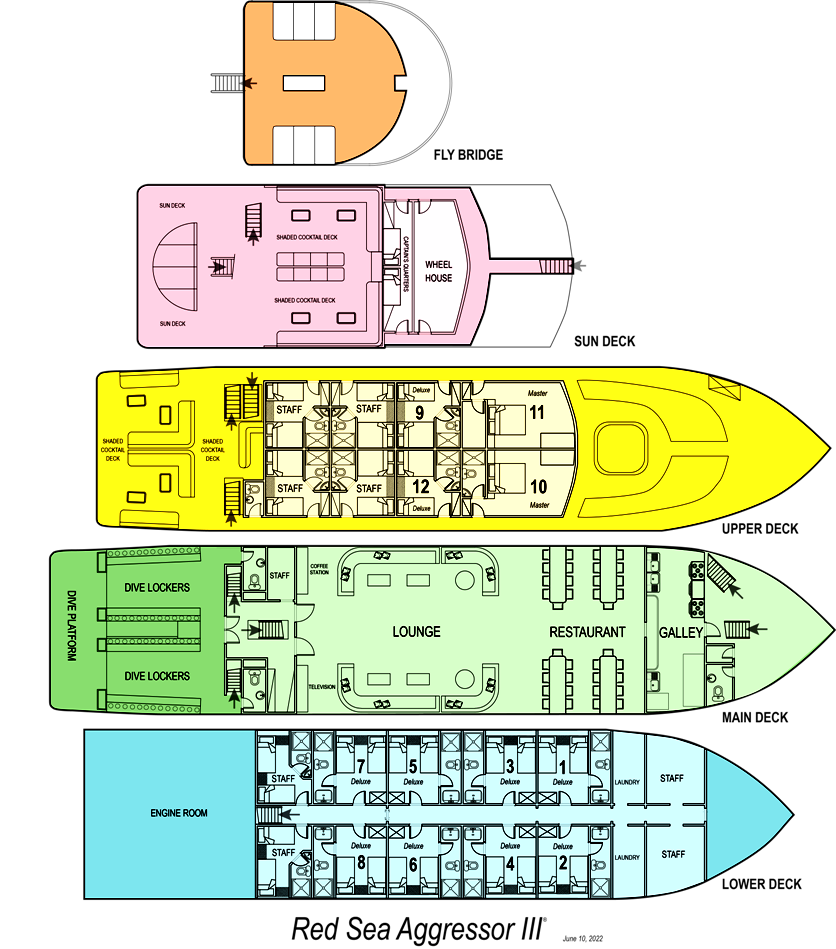 Built and maintained to the specifications of the local regulatory agencies and the regulations of the country of the flag.

The Red Sea Aggressor III concentrates on visiting the famous reefs of the southern Red Sea; the Brothers, Daedalus, Elphinstone & St Johns. Operating from Marsa Alam 7-day trips are generally the norm although longer trips may be possible for private groups.

View the highlights of these trips and an itinerary map....... open
The final itinerary is, of course, always dependant upon weather, sea conditions and where the best animal sightings are at any particular time of year.   Trips are offered all year round except for a maintenance period during January & February.

DIVING HIGHLIGHTS (all itineraries are Saturday to Saturday)

Elphinstone: long plateaus in the north and south. while the rest of the reef is a steep, colourful wall rich in hard and soft corals. Currents are variable, and can be strong at times. Shark sightings are possible and barracuda hang in the blue while cornet fish hunt anthias.

Malahi: great pinnacles reminiscent of ancient Greek columns tower over divers, creating corridors lined with hard coral and rock that wind this way and that. It’s an underwater maze.

St John's Caves: paradise for photographers and videographers. Sunlight streams through cracks in the passageways above. Bluespotted Rays glide past and Porcupine Fish retreat into the shadows. The many passageways are adorned with feathery Hydroids that glow red, orange and yellow as they catch the light. See juvenile clown coris, bicolour parrot fish, gold-dotted flatworms, and at nighttime, Spanish Dancers!

Zabargard: a mountain with a fringing reef all around. It’s color, color, color right to the steeply sloping reef wall. Both hard and soft corals live here and there are a lot of swim-throughs and bluespotted rays, barrcudas, Napoleon Wrasse and schools of hundreds of fusiliers. 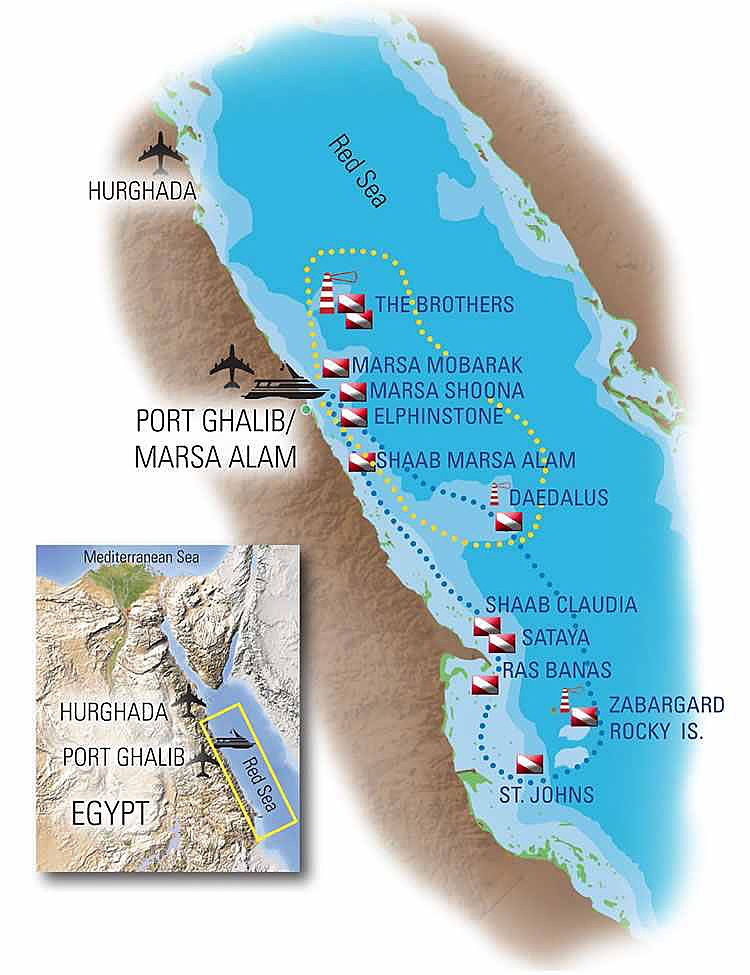 Airport transfers to and from Port Ghalib Harbor are included if you are arriving & departing from Marsa Alam Airport on the start and end dates of your trip. You will be met & transfered to the yacht. Guests may board the yacht Saturday afternoon anytime between 3 pm - 6 pm and through the evening. The yacht will depart the dock early Sunday morning after the Port Authorities have checked all guests' passports. Once clearance to depart has been authorized, no one can board the boat.  If you fly to Hurgada, a bus transfer can be arranged at extra cost.

After a week of diving, you'll return to Port Ghalib Friday afternoon between 2 and 4 pm. Friday evening after the sunset cocktail party, guests may go ashore and enjoy of the many restaurants in Port Ghalib. This dinner is not included in the cruise rate.  Check-out is Saturday morning at 8 am.